Rulebook not the playbook getting Irish players in trouble 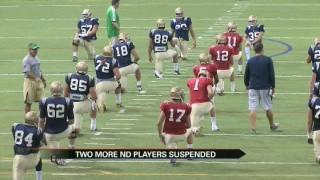 NOTRE DAME, Ind. -- We are just six days away from the season opener of the Fighting Irish football season and two more players are now suspended.

News broke Sunday afternoon that both starting running back Cierre Wood and defensive end Justin Utupo are suspended for the first two games of the season.

At the start of camp, the injury list was pretty short.

Starting quarterback Tommy Reese and Linebacker Carlo Calabrese were also off the klineup for the first game due to their suspensions in the spring. The pair were arrested at an off-campus party.

But, going into the summer training camp with only 3 players out, wasn't too bad.

"I want all of our guys to be great citizens," said Kelly at the first news conference. "Whatever those sanctions are, it's with that end in mind to have really good citizens that represent our football program."

But then, the injuries started piling up. Just days into camp, sophomore tight end Alex Welch went down during the first scrimmage at summer training. Coach Kelly would later confirm that Welch tore his ACL and would be out for the season. Junior outside linebacker Danny Spond also went down early in the summer with an unknown head injury.

But, the most recent injury was Junior cornerback Lo Wood's season ending torn ACL. Wood was expected to start for the Irish this season.

"I feel terrible for him," said Coach Kelly following the news of Wood's injury. "He's a young man that we all wanted to see get this opportunity that he's worked so hard for."

Junior defensive end Justin Utupo and Senior running back Cierre Wood are suspended for the first two games of the season for violating unspecified team rules.

In a statement released on Sunday Coach Kelly said,  “Our players are aware of the standards I set for our program and that failure to meet my expectations will result in consequences. Justin and Cierre violated our team rules so I’ve suspended them for the first two games of the season.”

Junior Theo Riddick is expected to start at running back for the Irish against Navy.