Running for a cause 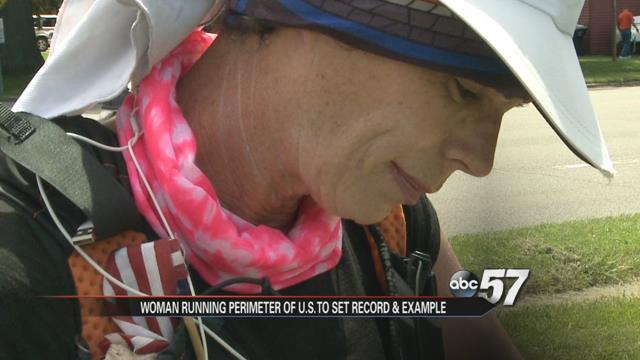 People run for many different reasons but one woman has dedicated her life to running and to changing the way people look at health in America.

Helene Neville is a 54-year-old nurse, grandmother, and four time cancer survivor who is working to be the first, in those categories, to run the perimeter of the United States. She is the face behind One On The Run, the cause to change the way people look at health.

So far, only three other runners have completed the 9,676 mile perimeter of the Continental United States.

“I started in 2010. It was a way to inspire nurses to become better ambassadors for health and then inspire that into their community and to their patients,” said Neville.

In 2010, she ran across America. The run started in Ocean Beach, California and ended in Atlantic Beach, Florida. She covered 2,520 miles in 93 days and became the first to run the southern route in the summer.

However, after that first run, she was diagnosed with cancer for the fourth time.

"I've had a few setbacks after the first run in 2010, I had to take a two year break. I had a fourth bout of cancer and actually once I was cleared I left for Vancouver, Canada and ran to Tijuana, Mexico," Neville said of her 2013 run.

In addition to overcoming a battle with cancer, she had yet another hurdle.

“Right before that run my 56-year-old brother died unexpectedly and I carried his urn with his ashes in my backpack. I carried them 1,500 plus miles, that was great. In addition to hospitals and schools, I stopped at every music shop along the way because he was a musician,” she said.

After she completed the 1,500 mile run from Canada to Mexico, she then set out on her next goal. That was to run from north to south.

She ran from Marathon, Florida to Portland, Maine. Her goal is to inspire everyone she meets to get active and become aware of their health.

“Sometimes I hear people say 'Well I'm just too burnt out to try.' But I tell them that you can't ever burn out if you were never on fire.”

She has always enjoyed running but got more involved about 20 years ago.

“I started running marathons in the late 90's when my immune system was shot and I had gone through three brain surgeries, cancer three times at that time period. I always wanted to try a marathon and I just kept going,” she said.

Neville began this last leg of her run on May 1 in Canada and plans to complete it in Washington on Sept. 5, 2015.

To meet this deadline, she runs about 25 miles per day.

“I just take risks and think outside the box. I just push on because I don't want to let anybody down. I want to rethink impossible.”

She had brain surgery three times in the 90's but she has seen an improvement in her health since she started running so much.

“My heath has been great, I stick to my diet and my training plan and it's about staying positive, and that's with anything in life. People say ‘save the best for last' but since we don't know when the last is, we have to give everyday our best. That's what I do.”

Her passion to inspire others is what keeps her going.

“There's so many reasons to quit or excuses or not to show up for something or to go to the gym but if you can just show up, that's the first step,” Neville added.

Every city she stops in, she talks with local nurses, hospital staff, firefighters, and school children in hopes of spreading her message.

“The health of the nation is only as strong as its citizens and somebody has to lead that charge. I stop and talk to schools and hospitals to kind of be that beacon of hope and health for changing the health of our nation.”

She stays in different peoples' homes along the way and enjoys meeting the faces behind every city she enters.

“This is what it's all about, just exposing how great the community spirit is and it's alive and we just have to look around, it's right there.”

Along the run, she raises money and donates to an underprivileged school in Philadelphia.

Neville lost her mother to cancer in 2012, and has a living memorial in her honor at St. Francis de Sales Grammar School where Neville's mother studied.