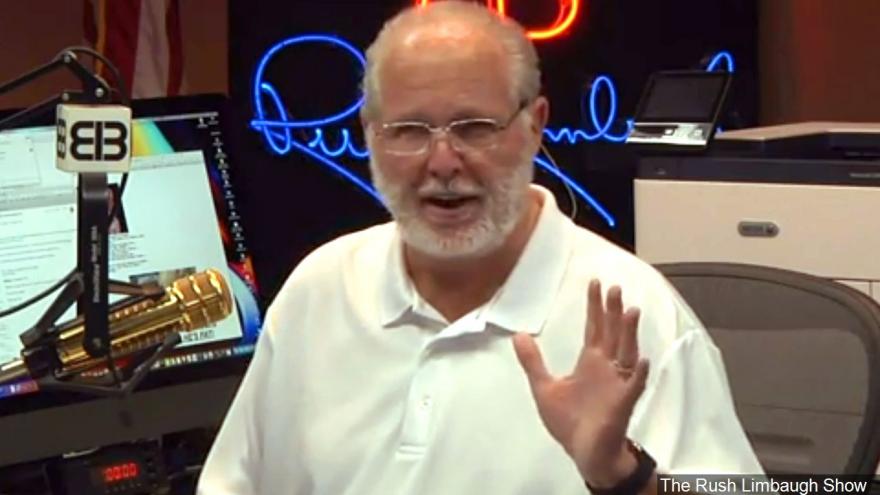 (CNN) -- Rush Limbaugh, the conservative media icon who for decades used his perch as the king of talk-radio to shape the politics of both the Republican Party and nation, died Wednesday after a battle with cancer. He was 70 years old.

Limbaugh's wife Kathryn made the announcement on his radio show Wednesday.

"As so many of you know, losing a loved one is terribly difficult, even more so when that loved one is larger than life," she said. "Rush will forever be the greatest of all time."

Limbaugh announced in February 2020 that he had been diagnosed with advanced lung cancer. Limbaugh continued to host his show while undergoing treatment, and he told listeners that he remained hopeful he would defeat the disease.

A pioneer of AM talk-radio, Limbaugh for 32 years hosted "The Rush Limbaugh Show," a nationally-syndicated program with millions of loyal listeners that transfigured him into a partisan force and polarizing figure in American politics. In many ways, his radio show was like the big bang of the conservative media universe. "The Rush Limbaugh Show" helped popularize the political talk-radio format and usher in a generation of conservative infotainment.

Using his sizable platform, Limbaugh advanced conservative ideas, though he often waded into conspiratorial waters and generated controversy for hateful commentary on gender and race. During the course of his career, Limbaugh started a number of fires with his commentary.

Limbaugh offered a conditional apology after he accused actor Michael J. Fox of exaggerating his Parkinson's disease and apologized when he a insulted law school student Sandra Fluke. He relentlessly attacked President Barack Obama, going as far as to fan the flames of birtherism, the discredited idea that Obama was born outside the United States and therefore not eligible to be President. And, in the last few years, he peddled "deep state" conspiracy theories, providing cover for former president Donald Trump, who he counted as a friend.

More recently, Limbaugh appeared to approve of some forms of political violence in the immediate aftermath of the January 6 insurrection at the US Capitol. He also drew backlash at the outset of the pandemic when he dismissed the coronavirus as the "common cold" and contended that it was being "weaponized" by members of the mainstream press to bludgeon Trump and harm his re-election chances. The missive was classic Limbaugh, who built a career on expressing strong distrust of the established press order and referred to himself as "America's Anchorman."

Despite his penchant for pushing conspiracy theories and peddling misinformation that benefited Trump and the other political figures he supported over the years, Limbaugh acknowledged the weight of his words in a 2008 interview with The New York Times.

"I take the responsibility that comes with my show very seriously," Limbaugh told the newspaper. "I want to persuade people with ideas. I don't walk around thinking about my power. But in my heart and soul, I know I have become the intellectual engine of the conservative movement."

From a young age, Limbaugh was interested in a career in radio. When he was 16 years old Limbaugh enrolled in a summer course on radio engineering and earned a broadcaster's license. He soon landed a job in local radio. Limbaugh's father demanded he attend college, but Limbaugh had little interest.

"My father expected me to be a professional man," Limbaugh told The Times. "The problem was, I hated school. I hated being told what to do. In the Boy Scouts I never got a single merit badge. In school my grades were terrible. I just didn't want to be there. I just wanted to be on the radio."

Limbaugh eventually attended Southeast Missouri State University for a year before dropping out. He struggled to find a stable career in radio, working at various stations, including as a top-40 DJ. Limbaugh also struggled in his personal life, having divorced two women in a span of 10 years.

Things changed when he moved to Sacramento, California, to work at KFBK-AM in 1984. From there, Limbaugh developed "The Rush Limbaugh Show." He struck success, doing well in the ratings and earning the attention of Ed McLaughlin, the former head of ABC Radio. In 1988, when Limbaugh's show became nationally syndicated, he moved to New York to broadcast from WABC.

"No one had heard anything like it before," Brian Rosenwald, author of "Talk Radio's America," told Boston Public Radio Station WBUR in 2019. Rosenwald added, "This is a guy who had been a DJ, gotten fired four times in the '70s but he took the high jinks from those DJs at times and infused it into a topical talk show where he was sort of applying it to the values that he had gotten at the dinner table from his father growing up."

Limbaugh found immense success, and quickly became the king of talk-radio. President Ronald Reagan dubbed him the"Number One voice for conservatism" in the country." Limbaugh even had a brief stint on television, hosting a talk show from 1992 to 1996 produced by the late Roger Ailes. Limbaugh said he had no real rivals.

But he did have some personal setbacks. In 2001, Limbaugh suffered hearing loss due to an autoimmune inner ear disease. He later received a cochlear implant. In 2003, Limbaugh announced that he was addicted to pain medication and would seek treatment. Limbaugh said he had become addicted after back surgery. In 2006, he was charged with "doctorshopping." His attorney said he pleaded not guilty and that the charge would be dropped once he completed 18 months of drug treatment.

Throughout it all, Limbaugh remained the king of conservative talk-radio, earning a fortune along the way. Limbaugh Florida estate had five houses. He expressed an affinity for expensive cars. And he owned a personal plane.

At the time of the 2008 New York Times interview, Limbaugh was nearing a contract renewal with Premiere Radio Networks which he estimated was worth approximately $38 million a year. He told The Times that the contract included a nine-figure signing bonus. In January, Premiere Radio Networks told CNN Business that Limbaugh had renewed a "long-term agreement," but did not disclose other details. Trump said at a rally, however, that it was for an additional four years.

"The most elemental fact about the Limbaugh career might be that, outside of seriously corrupt dictatorships, nobody has made as much money from politics as Rush Limbaugh," observed the journalist Michael Wolff, who profiled Limbaugh for Vanity Fair magazine in 2009.

In 2010, Limbaugh married his fourth wife, Kathryn Rogers, a 33-year-old event planner. Limbaugh paid a reported $1 million for Elton John to perform at the event, which was attended by members of the Republican elite, including Sean Hannity, Rudolph Giuliani, and Karl Rove.

Limbaugh was generous with his wealth. He once ranked fourth on Forbes' list of most generous celebrities, having donated $4.2 million to the Marine Corps Law Enforcement Foundation, about 13% of his earnings that, the publication said. Limbaugh has also used his show to rally listeners to donate to various charities throughout the years, helping to raise millions of dollars for those in need. In recent years, he and his wife started the Rush and Kathryn Adams Limbaugh Family Foundation.

His generosity extended elsewhere too. Jeremy Sullivan of Missouri's Kobe Club told Grub Street in 2008 that Limbaugh was someone who liked "to throw down the most massive tips" at restaurants. "The last few times his tips have been $5,000," Sullivan said.

Limbaugh, however, was a sharply divisive figure. He was a Republican kingmaker with uncompromising positions. Republican politicians and operatives dared not cross his path. In 2009, when then-Republican National Committee Chairman Michael Steele dismissed Limbaugh as an "entertainer," Limbaugh went on the attack. Steele later apologized.

In the last years of his life, Limbaugh, like most in conservative media, did everything in his power to protect Trump, resorting to peddling disinformation and conspiracy theories to his audience. He attacked the so-called "deep state," Special Counsel Robert Mueller, and other perceived enemies of Trump.

When Trump faced an impeachment trial the first time in the Senate, Limbaugh went to bat for him each day. Limbaugh attacked then-candidate Joe Biden, while simultaneously defending Trump. Limbaugh told his listeners that Trump's only offense was being "too successful."

"He's being impeached because his successes threaten great damage to the Democrat Party," Limbaugh claimed.

During Trump's second impeachment, Limbaugh accused Democrats of advancing an "abject lie" about Trump's involvement in the insurrection as part of a political effort to disqualify him from running for office again. Limbaugh said Democrats were "deathly afraid" Trump would retain his power over the Republican Party and so they wanted to "stop" him "from having a public life."

Limbaugh announced in February 2020 that he had been diagnosed with advanced cancer. A day later, Trump awarded him with the Presidential Medal of Freedom, the highest honor a President can bestow on a civilian. The decision to award Limbaugh the medal ignited fury among those who pointed to the radio host's divisive rhetoric and inflammatory comments.

"Empathy is due to anyone who is suffering. But not high honors, not a celebration of a life's work devoted to the mockery and derision of the Other," wrote David Remnick, the editor of The New Yorker. "For the President of the United States to bestow one of the nation's highest laurels on Limbaugh is a morally corrosive and politically cynical act."

Limbaugh, who had a close relationship with his radio audience, told his listeners that he appreciated the "love and affection" he had received, saying it was "unlike anything I've ever dreamed of or experienced." But he said he preferred not to talk often about his treatment or health.

"Let me remind you, I told you at the beginning of this that I'm very flattered by all of you who care," Limbaugh said."Don't misunderstand. But I vowed not to let this take control of my life. I've seen that happen. It's hard not to. It's a terminal disease for a lot of people. It takes over your life. I've vowed to not let that happen as much as I can."