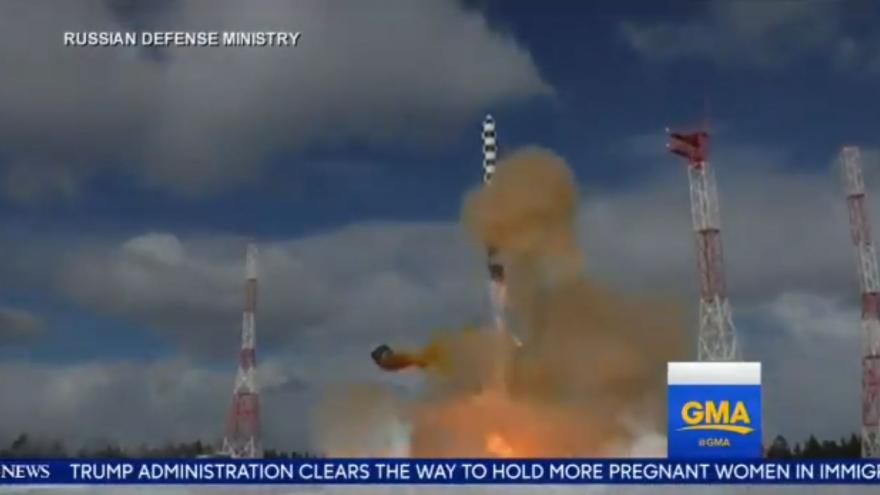 The short video said the missile -- nicknamed "Satan 2" -- was launched from the Plesetsk Cosmodrome in Russia.

According to Russian state-run news agency Sputnik, the launch marked the second time the missile had been successfully fired. The first test was in December.

Sputnik also reported that the Sarmat missile is "capable of striking targets both via the North and South Poles."

The RS-28 Sarmat is designed to replace the Soviet-era Voevoda ICBM, known by the NATO designation SS-18 Satan.

A more capable missile, the RS-28 could loft its payload over a longer distance -- enabling it to cross the South Pole as well as the North Pole, the shortest route between Russia and the United States.

Russian state-run news agency TASS reported in 2016 that the missile would have a range exceeding 11,000 kilometers (6,835 miles) and that the warhead would weigh 100 tons.

The Sarmat was one of the weapons Russian President Vladimir Putin mentioned in a speech this month boasting of new weaponry he said would render NATO defenses "completely useless." US officials played down the threat.

President Donald Trump said after a call with Putin last week that the two had discussed efforts to limit an arms race.

"The call had to do also with the fact that we will probably get together in the not-too-distant future so that we can discuss arms, we can discuss the arms race," Trump said.