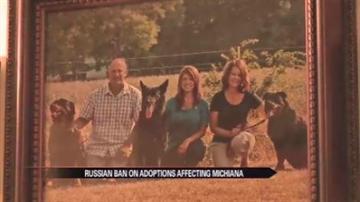 NEW PARIS, Ind. -- The president of Russia signed a law that bans Americans from adopting children from Russian orphanages.

ABC 57 talked with a family that adopted their daughter from Ukraine.

"Every night I say prayers for all the kids in the world that don't have families,"  said Wendy Hite.

Wendy Hite and her husband adopted their daughter, Aleeza from Ukraine when she was 8 years old.

Hite said it is something that you give your all to and pray for the best.

"We were very nervous that something would happen and we wouldn't get to bring our daughter home with us."

For Hite, the thought of the kids in Russian orphanages that will now never have a chance to be adopted is heart breaking.

"That's the part that makes me sad is the loneliness that those kids have to feel and not having any hope for the future."

Aleeza has been in the United States for eight years and says that adoption gave her a second chance at life.

"Here is like heaven to me.  If I was still in Ukraine, right now, I would be on the streets begging for food."

Aleeza said that when she heard about Russia banning adoptions she could not believe it.

"Those kids will not have a chance. All those dreams will be crushed and they won't be able to survive. They deserve a family," Aleeza expressed.

Wendy and Aleeza said that what upsets them the most is that the ban is that innocent kids are being punished because of politics.