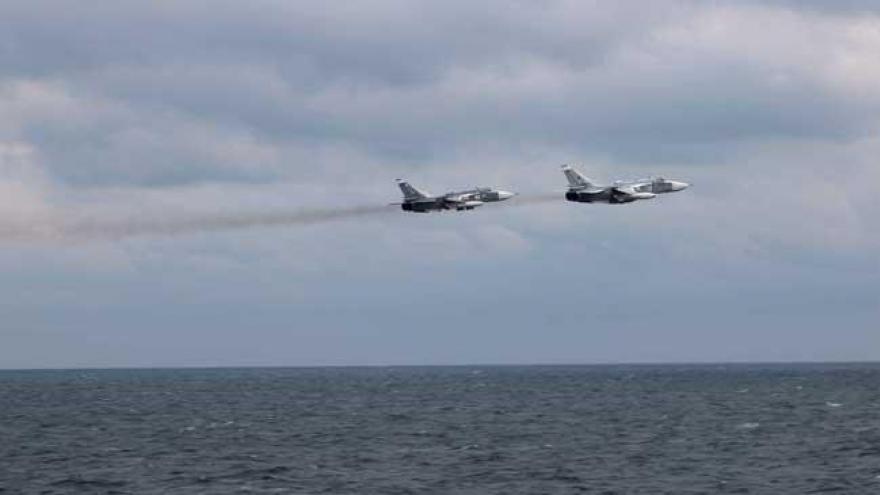 MOSCOW (CNN) -- The US military has released several photos of what it says were Russian fighter jets "buzzing" the deck of a US warship in the Black Sea last week.

The images of SU-24 fighter jets off the bow of the American guided missile destroyer USS Porter emerged as the commander of the US military arrived in Baku, Azerbaijan, to meet with his Russian counterpart.

Earlier this week, a Russian ministry of defense spokesman denied reports that Russian jets conducted "fly-bys" past the USS Porter on February 10.

The photos of Russian jets roaring close to the deck of the American warship appear to contradict Moscow's denial.

"The ship captain labeled these events as unsafe and unprofessional because of the potential for an accident," said Lt. Col. David Faggard, spokesman for the US military's European Command.

Faggard said at least four Russian warplanes conducted fly-bys at unusually low altitudes and at a high rate of speed on February 10.

He said the guided missile destroyer was sailing in international waters after having completed joint military exercises with NATO ally Romania.

First an IL-38 propeller-engine maritime patrolling plane flew past the vessel. It was later followed by three Su-24 fighter jets.

This isn't the first time Russian fighter jets have been filmed operating in close proximity to American warships and warplanes. Similar incidents have taken place in the skies above Syria -- where both air forces regularly conduct bombing operations -- and in the Baltic Sea.

According to an official from the NATO military alliance, there has been a surge of NATO aircraft that have "scrambled" to intercept Russian warplanes approaching NATO airspace.

Part of the increase is due to Russia's ongoing military operations in Syria, which borders NATO member state Turkey.

In November 2015, the Turkish military shot down a Russian warplane that was bombing targets along the Syrian-Turkish border. A Russian pilot was killed in the incident.

On Thursday, Chairman of the Joint Chiefs of Staff Gen. Joe Dunford is scheduled to meet with Chief of the Russian General Staff Gen. Valeriy Gerasimov in the capital of Azerbaijan.

Among the topics of discussion, according to a Pentagon statement, is "clear military-to-military communication to prevent miscalculation and potential crises."