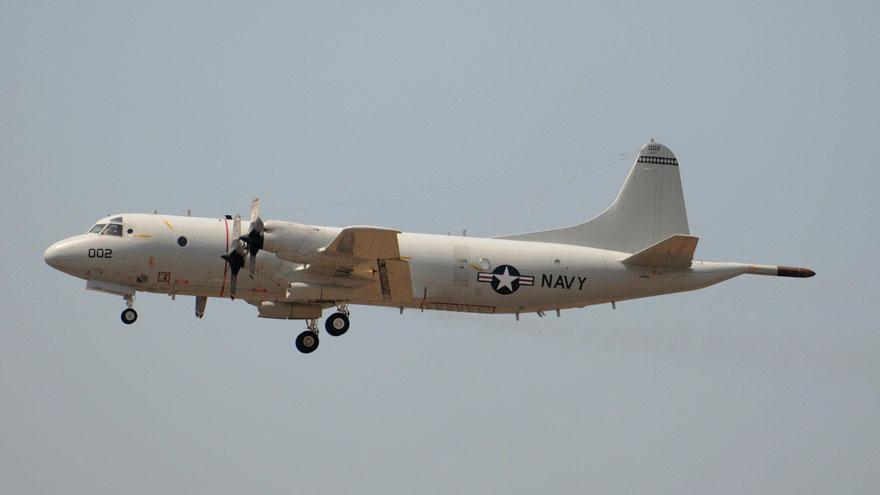 (CNN) -- A Russian Su-27 jet performed an unsafe intercept of a US Navy surveillance plane while it was flying in international airspace over the Black Sea Monday, three defense officials told CNN.

The American pilots reported that the Russian jet came within 5 feet of the US plane, according to two of the officials.

The Russian jet's action forced the US Navy aircraft to end its mission prematurely, one of the officials said.

US Naval Forces Europe, which oversees US operations in the region, later confirmed the incident in a statement.

"This interaction was determined to be unsafe due to the SU-27 closing to within five feet and crossing directly through the EP-3's flight path, causing the EP-3 to fly through the SU-27's jet wash," Capt. Pamela Kunze, a spokesperson for US Naval Forces Europe told CNN.

Kunze said the intercept lasted for a total of two hours and 40 minutes.

"Unsafe actions‎ increase the risk of miscalculation and midair collisions," Kunze said, adding, "The US aircraft was operating in accordance with international law and did not provoke this Russian activity."

The Russian Defense Ministry said its fighter jet flew "strictly in accordance with international rules" when it intercepted the US surveillance plane.

In a statement, the Defense Ministry said that an "unidentified air target" was detected approaching Russian airspace at about midday over the neutral waters of the Black Sea.

"A Su-27 fighter was sent to intercept the target and approached the aircraft at a safe distance and identified it as an ER-3E (Aries II) US reconnaissance aircraft," the statement said. "The crew of the fighter jet reported the identification of the American reconnaissance aircraft and accompanied it, preventing it from violating Russian airspace, observing all necessary security measures."

"The entire flight of the Russian Su-27 was strictly in accordance with international rules for the use of airspace and there were no extraordinary events," the statement added.

Several unsafe interactions between Russian and US military forces have taken place near the Black Sea.

Russian, US and NATO forces operate in close proximity to one another in the area, particularly since Russia boosted its military presence in the region following its annexation of Crimea in 2014.

The US Navy has upped its presence in the area in recent years.

He added that "while it is difficult to determine the degree to which senior levels in the chain of command are involved in the specific conduct of any particular intercept, one thing is absolutely clear: The Kremlin desires to challenge US military patrols in and above the Black Sea and elsewhere."

"It's a policy we must presume the Russian defense establishment is acting concertedly and aggressively to pursue. Russian military leaders are known for a lot of things. Independent thinking is not one of them," he said.

A Russian Su-30 fighter jet made an "unsafe" intercept of a US P-8A Poseidon aircraft in November while it was flying over the Black Sea.

The Russian jet's actions were deemed unsafe because the aircraft crossed in front of the US plane from right to left while engaging its afterburners, forcing the P-8 to enter its jet wash, an action that caused the US plane to experience "a 15-degree roll and violent turbulence," according to Lt. Col. Michelle Baldanza, a spokeswoman for the Pentagon.

The last reported incident between US and Russian aircraft occurred in December in the skies over Syria, when US F-22s intercepted Russian attack jets after they flew over the de-confliction line intended to ensure safety.

The US jets fired warning flares during the intercept of the two Russian Su-25 close air support jets after they crossed the de-confliction line multiple times, US officials said.

The Russian Ministry of Defense issued a statement denying the incident took place west of the de-confliction line, accusing the F-22s of interfering with the flight of the Su-25s while they were operating along the western bank of the Euphrates River in the vicinity of the town of Mayadin.