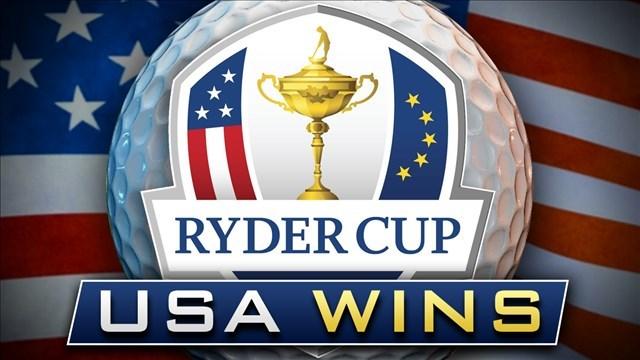 (CNN) -- An inspired United States team reclaimed the Ryder Cup Sunday with a resounding 17-11 victory over Europe at Hazeltine National.

It was a sweet victory for US captain Davis Love III, who had been at the helm in 2012 when Europe fought back from a seemingly impossible position for an improbable victory at Medinah.

But there was to be no repeat for Darren Clarke's men as the US won for the first time since the 2008 match in Valhalla, Kentucky.

"This team had to come together. We lost Arnold Palmer on Sunday, that was tragic for golf, that was a blow to our team to start the week, so many crazy things have happened," he told Sky Sports.

"We've been kicked around for so long, you keep losing, you've got to do something different. We're not going to win every one of them but we're back on track," he added.

Trailing by three points overnight, Clarke loaded the top of his order for the 12 singles matches with his star players, but it eventually proved to no avail.

Patrick Reed, the outstanding performer for the US over the three days, struck an early decisive blow when he beat Rory McIlroy in a pulsating top match.

Reed rolled home a six-foot birdie putt on the 18th to finally close out a titanic contest littered with birdies and eagles.

"I really just think its the fans. It gets you going and keeps you going," Reed said as he reflected on his victory.

McIlroy, winner of the Tour Championship and FedEx Cup last weekend, looked crestfallen, receiving a consolation pat on his back from captain Clarke, but the boost to home morale was significant.

Rickie Fowler also edged Olympic champion Justin Rose in another match that went the full distance with the home side coming out on top.

It was not all one-way traffic as British Open champion Henrik Stenson beat an out of sorts Jordan Spieth 3&2, with debutant Thomas Pieters of Belgium again impressing with victory over JB Holmes by the same score.

It was the fourth point in five matches for one of Clarke's wild card picks.

Rafael Cabrera Bello, another of the six rookies in the Europe line-up, followed suit against US PGA Champion Jimmy Walker but the middle and bottom of the order showed too much red on the scoreboard, signifying United States dominance.

Veteran Phil Mickelson rammed home his 10th birdie of the day on the 18th but was matched by Sergio Garcia, the Spaniard with his ninth, as another epic encounter ended all square and personified the quality of golf on show.

Attention then turned to the matches where the home side needed the remaining one and a half points to reach 14 1/2 to reclaim the Ryder Cup.

Brandt Snedeker beat England's Andy Sullivan 3&1 to take the United States to 14 points and on the threshold of a famous victory, sealed by Moore, who came from a losing position to beat Lee Westwood on the final green.

Moore, edged out by McIlroy for the Tour Championship in the playoff, had been Love's final pick, but justified his selection at the last, winning the last three holes against veteran Westwood with an eagle, birdie, par finish.

"To score the clinching point in the Ryder Cup is just incredible," Moore said. "I can't digest what just happened. I was trying my hardest not to let my team down."

Martin Kaymer, who famously sealed the winning point at Medinah in 2012, rallied to beat Matt Kuchar, but it was too little too late for the Europe, which had won six of the previous seven contests.

"We're all bitterly disappointed. We knew we had a lot to do after that opening session," Clarke told Sky Sports.

"We couldn't have done anything more. I've had a wonderful team behind me and we've all made our decisions together. At the end of the day it's congratulations to Davis and we'll try to win it back in two years time in France."