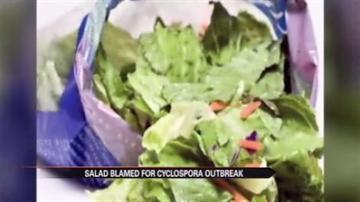 Scientists pinned the source of the cyclospora stomach bug that is sickening hundreds across the country.

Health official believes a garden salad mix found in restaurants and grocery stores is to blame for the outbreak.

Most of those mixes are gone now because of their short shelf life but the stomach bug they left behind is still very much alive.

Four-hundred people nationwide had severe diarrhea, vomiting, and fatigue and the symptoms can last for up to six weeks.

New cases are starting to dwindle.

The disease is caused by a parasite.