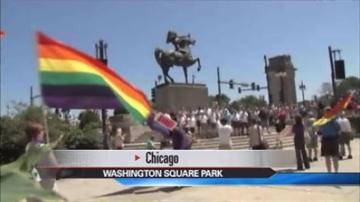 CHICAGO — Hundreds of same-sex marriage supporters marched through the streets of Chicago Saturday demanding marriage equality for all.

Activists are asking for the passage of marriage equality legislation before it goes to the state house of representatives.

Following the rally, supporters marched to Washington Square Park, which was the site of the beginning of the first Pride parade in Chicago.