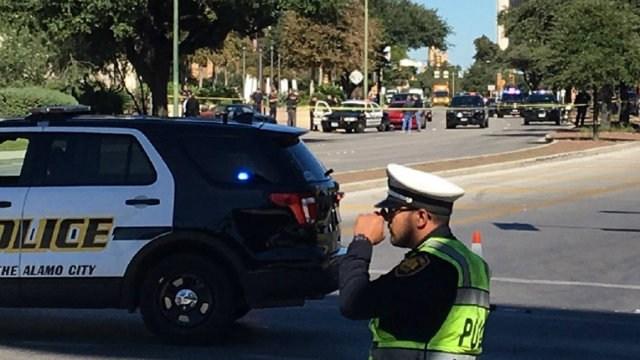 (CNN) -- A San Antonio police officer was shot to death during a traffic stop Sunday in what the department's chief described as a targeted killing similar to recent police shootings in Dallas, Texas, and Baton Rouge, Louisiana.

Police are looking for the suspect and the vehicle he is believed to have fled the scene in, Chief William McManus said Sunday in a news conference.

The officer had just pulled over a driver in a traffic stop on the south side of police headquarters, McManus said. The officer returned to his patrol car to write up a ticket when the suspect pulled up behind him.

"This is everyone's worst nightmare, the officers in the department, the family and everyone who supports the officers," McManus said.

The shooting occurred near police headquarters, McManus said. After the shooting the suspect returned to his vehicle and drove away.

Police released a photo of the car the suspect is believed to have left in.

While motive is still being investigated, McManus likened the shooting to recent deaths of police officers in Dallas, Texas, and Baton Rouge, Louisiana.

Both of those shootings followed police-involved shootings of civilians that triggered protests nationwide.

"It's always difficult especially in this day and age where police are being targeted across the county," he added. "Hopefully we'll solve this one real quick, and if this individual is a danger to more police or anyone else we will try to get him off the street as soon as we can."

"I want to extend my deepest condolences to the family of the officer killed outside police headquarters today as well as to our entire police force. This type of crime cannot and will not be tolerated. I ask for the community's thoughtfulness and patience as the investigation continues and SAPD searches for the suspect," Taylor said.