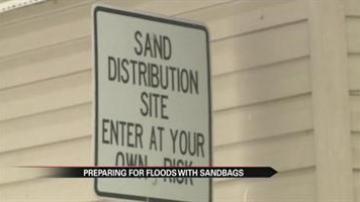 ELKHART, Ind. -- As the snow melts with the warmer weather, some areas in Michiana may experience flooding. Residents along the Elkhart River say flooding is a part of life.

"When we get that rain, a lot of water comes up, and we get a lot of flooding," said resident Michael Bristol.

Bristol has lived on the Elkhart River for 20 years. He says flooding is just a part of life.

"Six feet, seven feet, over the top of the banks. So we will get a little water in the basement," said Bristol.

The melting snow can become a problem, so Elkhart County Emergency Management is helping residents get prepared.

"Everybody to just be watching out, watching for areas that they will have flooding and trying to get that water diverted away from important areas of their home," said Michael Pennington, Deputy Director of Elkhart County Emergency Management.

Pennington says residents should get sandbags before it is too late.

The sand and sandbags are free - you just have to bring a shovel and fill them yourself.

"It is a self-serve location so bring a shovel," said Pennington.

The Bristols are ready and watching the river.

"It comes with the territory, if you are going to live on a little river like this, and you are going to get all this snow, particularly with all this ice, which could cause a little more high water than what we have seen because of the ice," said Bristol.

You can get the sandbags at the Elkhart County Highway Traffic Division, Boy Scout Camp on CR4 & SR15 and the Elkhart City Streets Department.