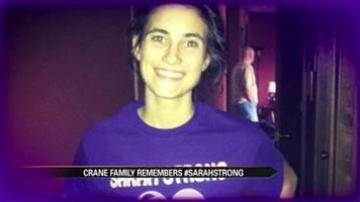 ELKHART, Ind. -- Sarah Crane stole our hearts after she was diagnosed with stage 4 colon cancer in July 2013. Between July and her death in December, the community rallied around the Sarah Strong movement. Now her family is starting the Sarah Crane Foundation and scholarship program.

"The fact that she had colon cancer was very shocking because she was so young," said Julie Crane, Sarah's mom.

At just 15-years-old, Sarah Crane was one of the youngest girls in the country to be diagnosed with stage 4 colon cancer.

"You have Riley's Children's Hospital say, we'd love to help, but we don't know what to do. The Mayo Clinic, St. Judes, kind of the same thing. We'd be willing to assist, but we have no idea what to do," said Dean Crane, Sarah's dad.

"It just seemed like everything that could go wrong, went wrong, but we still kept fighting," said Julie.

Fighting with the hope cancer treatments would slow or stop the deadly disease.

"She never really harped on what she had. It was more the fact she wanted to get up and get out of that bed. She had things to do, people to see, places to go and this was an inconvenience for her," said Dean.

"She was willing to do anything and everything she had to do to beat it," said Julie.

"I would get frustrated. We never had a good appointment. It was always if we went in for an hour, it would be six because something wasn't right," said Dean.

With set-back after set-back, Dean and Julie say Sarah never gave up hope.

"She felt, I think I could do this. I really think I can beat this," said Dean.

The entire community of Elkhart was behind her.

Sarah proved to be strong.

They rallied for a young girl most had never met.

"I don't know what it was that struck such a chord. I don't know what that thing was, but boy she did. She really had a good impact on people and it was neat to see that. Wow. It just makes you say wow," said Dean.

But all the support in the world couldn't stop the cancer from taking over her body.

It was clear that Sarah wasn't going to get better.

Around last Thanksgiving doctors told Sarah and her family that she only had weeks, or even days to live.

Her parents said Sarah stayed strong and kept fighting to the very end.

In early December, surrounded by her parents and three sisters at her home, Sarah opened her eyes, as if to say goodbye, before taking her last breath.

"I'll never be the same person after December 7th. For me, I can't be, I can't be at all and that's what we're trying to figure out, okay, who are we now?" said Dean.

"Some days, I just want to give up and I have 3 other girls to love every day," said Julie.

Every day Julie says she misses Sarah, but says she is always in her heart.

The foundation is set to launch next month.