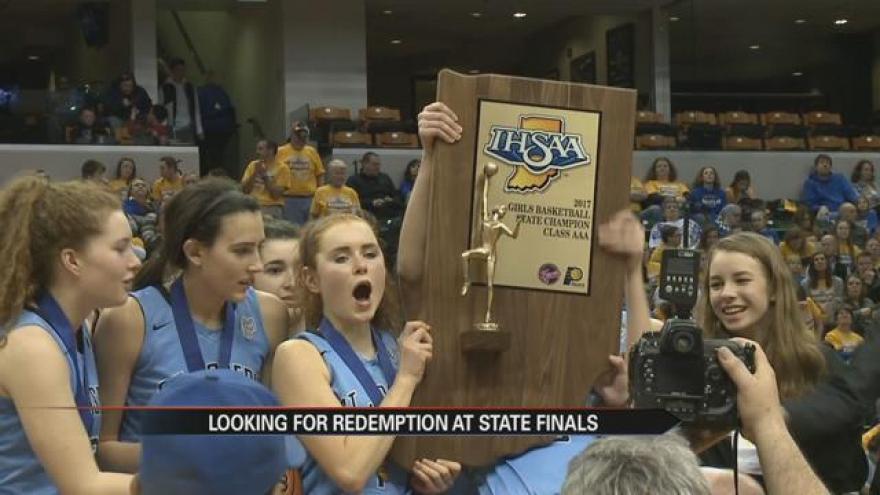 A ride these girls will never forget, ending the only way they wanted it to.

The St. Joseph Lady Indians captured the IHSAA 3A State Championship defeating North Harrison 57-49 Saturday at Bankers Life Fieldhouse. Led by Daly Sullivan's 21 points, St. Joe never trailed from the 2nd quarter on and took home the program's first state title since 2005. The key players of that team, Sydney Smallbone, Kristen Dockery, and Megan Lechlitner, just happened to be a part of the coaching staff this season.

"I just love the game of basketball. I'm a hoosier through and through. Player, coach, to win to compete, it's just awesome," Smallbone said.

With the win, Smallbone becomes the first woman in IHSAA history to earn a state title as a player and head

A great night to be a Sullivan with Daly leading the team with 21 points and her younger sister, Keegan, grabbing 12 rebounds.

"Knowing we're going out like this is a great feeling, I don't know what would be better, we're going out on a win knowing we just won the state championship," O'Connor said.

Killian Mountford added 10 rebounds for the Lady Indians and was named the Mental Attitude Award winner.

A rally to welcome home the state champs will be held at St. Joseph High School at 12:30 on Sunday.