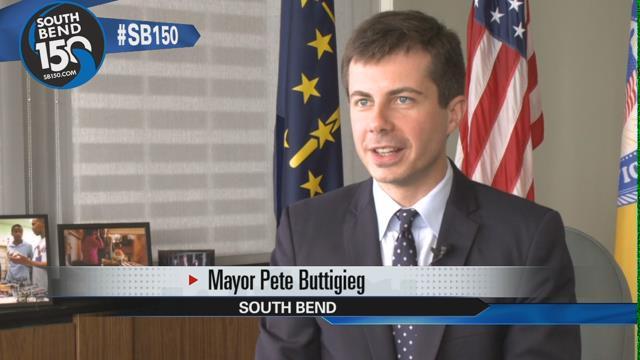 SOUTH BEND, Ind. -- In advance of the South Bend 150 celebration, ABC57's Colleen Bormann sat down with men who helped shape South Bend into the city it is today.

According to South Bend Mayor Pete Buttigieg it's the perfect time to be mayor.

“I love my timing. We are living in the middle of what's going down in history as vital transformative decades in our city. Think about how much has happened in a short amount of time,” said Mayor Buttigieg.

He calls it a transformative decade, specifically because of the high-tech companies that now call south bend home.

"I think we have really gotten out of the mode of waiting for Studebaker and have begun new economic possibilities for the city. Those possibilities are in industries that didn't exist when I was growing up here-- data centers, nanotechnology,” said Mayor Buttigieg.

Since taking office in 2011, Mayor Buttigieg has had a lot of goals in mind.

The top item on his list was addressing the abandoned homes and buildings. From that concern, the 1,000 homes in 1,000 days initiative was born.

"Seeing a lot of neighborhoods turn the corner, a lot of those crumbling properties we fixed up or torn down- that's going down as one of the most important things that happened in our city in these years,” said Mayor Buttigieg.

As he reflects on his time as mayor, Mayor Buttigieg hopes the momentum continues.

He plans to be here for next big anniversary.

“I'm hoping to be on hand for the 200th anniversary and I hope as we look back, we are able to say these are the years South Bend really got back in the saddle and move forward faster,” said Mayor Buttigieg.

This weekend Mayor Buttigieg says there's more to celebrate than a birthday.

“It's about more than a milestone, it's about the comeback of our great community.”