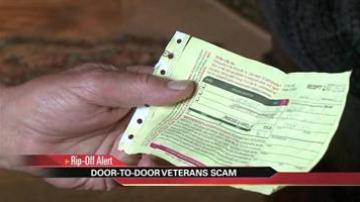 ELKHART, Ind. -- Residents in Elkhart said a young man is going door to door selling magazines saying the money will benefit soldiers. After neighbors did some research, they said it was a scam.

A few residents in the area said they were too scared to go on camera.

The neighborhood where this happened is very small. Neighbors say they were surprised it was likely a scam.

"He was a very polite guy," says one neighbor who asked to remain anonymous.

The neighbor said he bought the magazines because he is a veteran and wanted to support the troops.

He says he felt terrible after learning the salesman could be a fraud, and he'll be more careful from now on.

A few neighbors described him as a white male, about 5'6", with a scar on his left arm and a gap between his front teeth.

They also said the company he was representing "Fit for Life."

If you come into contact with this person, you're asked to call the Better Business Bureau.