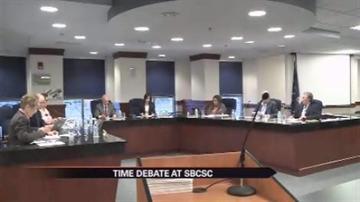 SOUTH BEND, Ind. --  Eastern or central time for Indiana? That question has been a hot topic of discussion for years.  Many say we belong in Central time because of our geographical location.

Others believe Eastern time is better for our local economy.

The Central Time Coalition told the school board Eastern time is dangerous for South Bend students.

“When we compel hundreds of thousands of kids onto the streets and highways in pitch darkness for much of the school year you are going to get more fatalities, injuries, abductions and rapes," said the Central Time Coalition.

According to the Coalition’s statistical research, on average eight more children have died per year since the schools’ time change seven years ago. That adds up to 56 more fatalities.

In the age of the telegraph and the telephone, the coalition says Indiana first switched to Central time for financial reasons.

But in the modern era, with instant communication through email and texting, the coalition claims the financial benefits are null.

“There is no benefit to our business being in the Eastern time or the Central time zone,” said the Central Time Coalition.

But not all of the board was so sure, 2 of the members did abstain from voting, because they felt they did not have enough information.

The resolution to the Central Time Zone did pass with votes in favor.