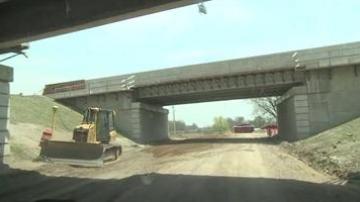 LAKEVILLE, Ind. -- A Union North United School Corporation bus driver says she's terrified by the route she has to drive. We followed the route with the driver in her minivan and by the time she was done, she was shaking at the thought of driving the route with a bus full of kids.

"As of right now, today, I don't know how to do my afternoon route and I leave in 5 minutes," said Boocher.

Because of construction for the new US 31 roads that are normally part of her route are closed.

She says her supervisors expect her to drive through the construction.

"How can you justify the safety of 44, 45 kids to drive through road construction? I wouldn't want my kids on the bus," said Boocher.

Boocher says her stomach turns at the thought.

"What happens if I back up into a ditch? Who do I call?! Hope and pray that my bus don't roll over?" said Boocher.

She says the head of the transportation department told her to figure it out.

"They want me to drive through the road construction and turn to the right," said Boocher.

In order to clear all the barriers on her route, Boocher says she would have to back up and do a 5-point turn.

"When I got my License in 2002, they told that us are never supposed to back your school bus up ever. Well, I'm turning around 5 times," said Boocher.

Boocher spent the day trying to come up with an alternate route.

"I am liable for every kids that's on that bus," said Boocher.

She says the route the school district assigned her is just too dangerous.

We reached out to the head of transportation for the Union North United School Corporation, but we're waiting to hear back.