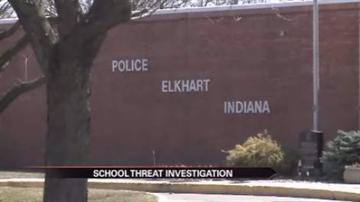 ELKHART, Ind. -- Parents, law enforcement and school leaders are on alert after learning someone made a threat against St. Joseph and Elkhart county schools. The threat, written on a bathroom wall, said that 20 kids would be killed at five schools within the two counties on April 15.

Some local police departments and school districts didn’t know about the threat until they heard ABC57 report it Monday afternoon.

When Lieutenant Matt Blank of the St. Joseph County Police heard about the threat to harm students in Elkhart and St. Joseph counties-- he called Elkhart Police for specifics.

"Well whenever we receive threats like this we have to take them seriously,” said Blank.

He found out the threats were written on a bathroom wall at the Bureau of Motor Vehicles in the city of Elkhart in January.

"We will probably increase security a little more on a day like that. Just to help put people's minds at ease-- both the students and parents and of course the educators working at the school,” said Blank.

"This notice just became available to us yesterday,” said Mike Seger, the Director of Safety and Student Services for Penn Schools.

Seger says they're still trying to get information.

"At this point it's very vague and we don't have any specific as it relates to it. However all of our schools are locked down during the day and we will ensure that our schools are on notice in regards to that particular day and time,” said Seger.

Elkhart Community Schools representatives say the threat is so vague it has no plans to send a memo to parents -- and that upsets Angelia Mazar.

"I think they should send a notice home for the parents that aren't on Facebook or that don't get the newspaper so that way they are aware of what what's happening,” said Mazar.

"I don't think that they should have waited a week before this incident that is supposed to happen,” said Mazar.

We have been trying to get more information from the Elkhart Police, but they are not available to do an interview.