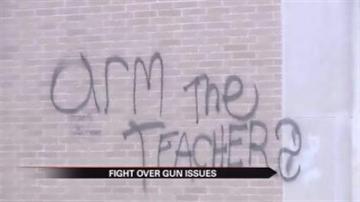 ELKHART, Ind. -- The streets of Elkhart are like many others across the nation, divided over how much gun control is needed. Especially after recent threats were made against local schools and a graffiti message that said “Arm teachers” was posted on Elkhart Central.

"I definitely think of Combine. That's the number one thing it makes me think of,” said Jennifer Evans, an Elkhart resident.

The graffiti message is gone, but parents say it does bring up the issue of gun control.

"I think that there should be more laws on it, better laws,” said Evans.

"The second amendment is what it says it shall not be infringed and even the Indiana constitution says they have a write to arms themselves protect themselves and the state,” said Rogers.

He says he hasn't seen a proposal that would stop criminals from getting guns, but they would just negatively affect law abiding citizens.

"If we have that mentality that gun free zones are going to keep guns from the bad guys we’re delusional. That's not going to happen,” said Rogers.

Rogers stresses the importance of empowering parents with ways to protect themselves and their families.

A proposal was passed in the house on Monday to give grant money to hire more public safety officers.