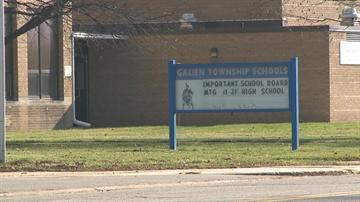 GALIEN, Mich. - The Galien Township School Board could cut teachers or worse decide to close the district all together. Galien Schools are facing a budget crisis and could have to pay back the state of Michigan a half million dollars for over counting their students. A meeting is being held Monday night and the district superintendent asked every parent to show up.

Galien schools have been losing enrollment since the ‘Schools of choice’ act was implemented in Michigan. The district’s High School closed. Student population has declined to just over 120, and the ten remaining teachers took a pay cut in June to keep the district from closing.
Being a parent isn’t hard for Josh Gnodtke. A graduate of Galien Schools he lives and works in town. He brings his four-year-old daughter, Audrey, along every day. Next year Audrey goes into kindergarten and Gnodtke said it would be nice to drop her off at Galien Elementary, just a block away. “You know it’s easy we work full time,” he said.
Gnodtke thinks it might not be an option. In a message to parents, Superintendent Tim Allard wrote that Monday’s school board meeting would address ‘drastic decisions’ that are required in the district and will impact ‘staff and students’ alike.
“It’s a crying shame,” said Clarence Marsh, a graduate of Galien. Marsh is a father of four graduates and Galien’s village president. Marsh is worried the district’s viability. “It’s a crying shame that the school is on the brink of closing,” he said.
Marsh was disappointed when a state audit revealed Galien allegedly over counted 77 students from 2008-2011 and needs to pay back $500 thousand. The district denies the allegations and said they have proof the students were there. Galien officials appealed the state audit but have not received results. ABC 57 News talked to a spokeswoman from the Michigan auditor’s office Monday who said results would not be back for weeks.
Any uncertainty in the schools concerns Marsh. “I’ve felt all along that it was going downhill,” he said. He said since ‘Schools of choice’ was implemented in Michigan the student population dwindled down so low there’s not much left Galien can offer to its students. “They’re leaving this area because of sports and band. There’s no way you can compete with them,” he said.
Galien closing its doors worries Gnodtke. “Kids around here don’t have a place to go unless they travel,” he said. And his hometown school could be gone for good.
His hometown school might be gone for good.