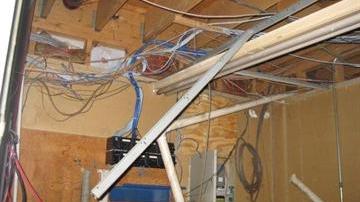 Now urinals?  Really?  Is nothing off-limits?  The answer is, virtually, "no".

As the price of metal surges, so does the crime rate as thieves are scrounging to make a buck. Communities with vacant properties are particularly vulnerable.  They will tear down siding, eaves troughs, walls and ceilings to get at aluminum, copper, pipes and wiring, leaving behind thousands of dollars in damage, and often flooded basements.

Catalytic converters have long been a popular item for crooks.  They contain platinum, which fetched up to $2,000 an ounce in 2011.  This has motivated the organization of theft rings that are targeting businesses with numerous vehicles where dozens can be stolen at once.  All of this has made the Elkhart RV industry, in particular, a prime target.

Irrigation companies have seen a spike in thefts of brass backflow valves from business and residential systems.  Many homeowners won't even discover the loss until they try to turn on their systems in the spring.

Of course, we've all been outraged at the heartlessness of those that have robbed the grave; vases, urns, headstone plaques.

The latest discovery of the scrapping underworld seems to be urinals.  Some local restaurants have found their mens rooms rendered useless after discovering the facilities yanked from the wall.

I've often wondered who these companies are that are paying people who show up with a grocery cart or a pickup filled with this stuff?  Obviously, some businesses are more reputable than others.  Metal recycling yards are required by local and state laws to obtain identification and a fingerprint from anyone scrapping metal.  They're also supposed to document from where the metal came.  But the honor system seems a little pointless in some scenarios.

Crime Stoppers asks everyone to be vigilant.  Keep an eye on your valuables, and report any suspicious activity in as much detail as you can.  (We love license plate numbers).  If you fall victim, please report it to your local police, even if you think it's minor.  This helps track crime patterns.  While Crime Stoppers pays cash rewards for information leading to the arrest of felony offenders, and some individual offenses may be considered only misdemeanor, often cases like these end up felonies in totality.

If you're in doubt that what you've seen should be considered suspicious, make the call (or the web tip).  It's always better for us to receive too much information than not enough.