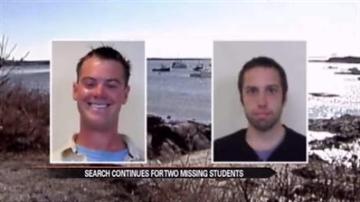 KENNEBUNKPORT, Maine. -- The search for clues in the mysterious disappearance of two young men from Maine continues.

Police are calling it one of the strangest cases they've ever seen.

Two friends 21 and 23 years old, are students in yacht design school. They disappeared last week off the coast of Maine.

Authorities say there is some indication that the two were boating. Police say they found clothes they believe belong to the men on rocks nearby. They are using sonar in an attempt to find their bodies.

"We're dealing with tides now, low tide which is making access difficult with the tide coming in we'll be able to have more boats, air boats, for access for our canine handlers as well," said Sergeant Tim Spahr, Maine Warden Service Sergeant.

The pair was last seen late Wednesday night at a party.  Both had reportedly been drinking and may have ventured into the water.