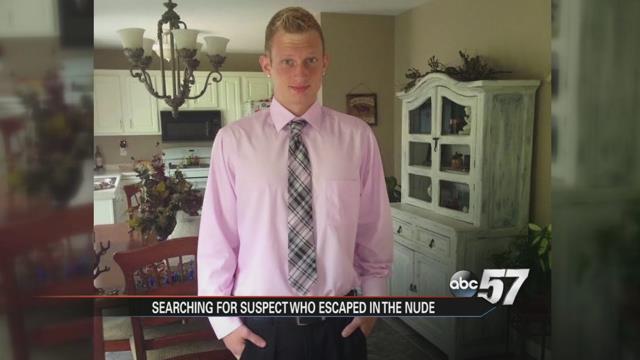 St. Joseph County Police continue to search for a man in Osceola near Baugo Bay.

The family has identified him as 19-year-old Riley Graham.

The story has gotten a lot of attention on social media from neighbors who spotted the suspect handcuffed and nearly naked.

But Graham’s mother Sabrina Dini said it is no laughing matter.

“If this was your son, daughter, child, relative I don’t think that it would be comical. Nobody knows the underlying issues Riley has suffered from,” said Dini.

Monday afternoon Graham was almost taken into custody on a misdemeanor warrant for failing to appear in court.

But the arrest didn’t go as planned.

“When the officer encountered the suspect initially, he was only wearing shorts. In the course of a fight with one of the officers those shorts got torn off. So for awhile the suspect was in the neighborhood with basically no clothes at all,” said Assistant Chief Bill Thompson with the St. Joseph County Police Department.

Residents heard about the naked man on the loose.

“You’re just kind of watching. I mean you know everyone that lives around here,” said neighbor Joel Friesner, who heard rumbles of the incident.

So Tuesday, instead of passing judgment, the suspect’s mother is asking for a little compassion.

“Prayers. If you have time to donate a kayak or boat, or just look if you live on the river for my son, or just be on the lookout for him. He’s 6”2, blonde hair, about 175 pounds, last seen wearing Jimtown gold shorts,” Dini said.

She said her son, a graduate of Jimtown High School, is not violent but does suffer from four brain injuries.

“Riley I am so desperately trying to find you and I am so afraid. I just want you to come home so I know you’re okay. And I love you,” Dini said.

Police said this is an active search.

The charges have increased from a misdemeanor to level 4 felony for escaping arrest.