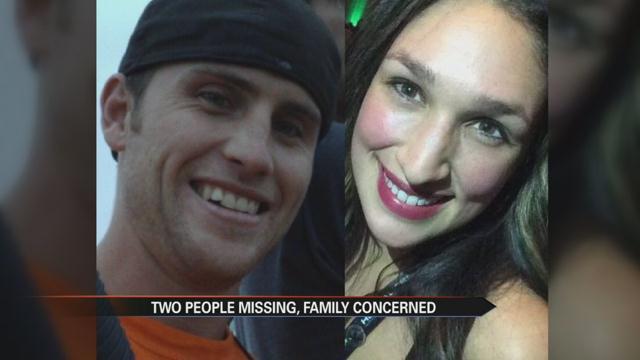 Family and friends in Niles are mourning the loss of Autumn Mehl, 29, and Steven Rough, 26.

"They were last seen at the bar Jay's Lounge," Gabriel Hernandez, Mehl's brother, said in an interview Sunday morning.

Hernandez said people had been in contact with Mehl and Rough, who were friends, throughout Friday night, but then it stopped.

"There was some contact, but that drifted away around 10:30 [Friday] night," Hernandez said. "And then at two in the morning [communication] just stopped."

Mehl taught Zumba classes at the Niles YMCA and when she didn't show up for her Saturday class, and then missed a birthday party she was supposed to attend, Hernandez and his family started to worry.

"And it came time, around six o'clock [Saturday evening], for my sister to get her daughter ready for her daughter's first father-daughter dance," Hernandez said. "And when she didn't show up to that, we just knew something was actually wrong, cause a mother's not gonna miss her first daughter's dance."

The Berrien County Sheriff's Department was made aware that the two were missing around 5:30 p.m. Saturday night and a Facebook page dedicated to finding Mehl and Rough quickly grew.

By Sunday morning, Hernandez met with dozens of people gathered at the YMCA to form a search party.

"I like seeing all this support," Hernandez said. "I don't know half these people but they know my sister, somehow, so it makes me feel better."

But shortly after the search party got to work, a member found Mehl's car turned over in a creek on Bond Street near Fort Street around 9 a.m..

"The car was upside-down, completely submerged in the creek," Lt. Trent Babcock of the Berrien County Sheriff's Department said. "And at that point, a tow truck arrived, we up-righted the car and found the people inside."

Mehl, a mother of three, and Rough, a father of one, died in the crash.

Lt. Babcock said the roads in Niles were very slippery because of the winter weather, and there is no guardrail or fence preventing cars from driving off into the ravine Mehl and Rough did.

Police are awaiting autopsy results and toxicology reports to determine whether or not alcohol was a factor in the crash, but a bartender at Jay's Lounge who served Mehl and Rough Friday night said the two left the bar in good condition to drive.

A candlelight vigil took place Sunday night at 7 p.m. outside the Niles YMCA.

A GoFundMe account has been set up so people can donate.