Search expands for AirAsia Flight QZ8501, likely at 'bottom of the sea' 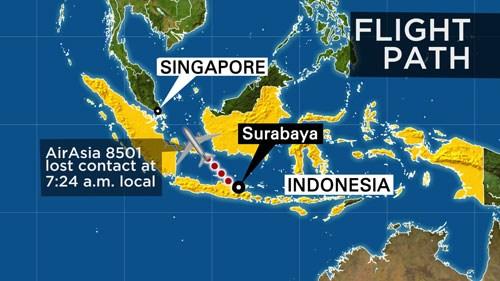 (CNN) -- The search for a missing airliner with 162 people aboard will expand Tuesday, the Indonesian government announced.

Four additional areas will be searched, the national search and rescue agency said.

So far, the search has been fruitless.

"Our early conjecture is that the plane is in the bottom of the sea," said Bambang Sulistyo, the head of the search and rescue agency. That belief is based on the plane's flight track and last known coordinates.

Officials may need help from other countries for an underwater search, he said.

France dispatched two investigators to Indonesia. They are due to arrive in Jakarta on Monday, France's Foreign Ministry said.

The missing plane is made by Airbus, a French company.

Rescuers say weather was probably a factor in the plane's disappearance.

Large waves and clouds hampered the search for the plane Sunday and Monday. But Indonesian Vice President Jusuf Kalla told reporters his country will not give up or set a time limit for the operation.

A possible oil slick within the search zone has been discounted as not being from an airplane, Indonesian authorities told CNN. Likewise, reports of a very faint flight recorder "ping" are false, Indonesian local media reported.

There were reports of objects found in the search zone, but given that the area has a great deal of traffic along the water, authorities have said objects found won't automatically indicate a sign of the plane.

Kalla told CNN there were "some reports from Australia" about possible objects found, but it was unclear whether they were from the plane.

The plane, flying from the Indonesian city of Surabaya to Singapore, went missing as it flew over the Java Sea between the islands of Belitung and Borneo -- a heavily traveled shipping channel with shallow waters -- Indonesian authorities said.

Before the plane, an Airbus A320-200, lost contact with air traffic controllers, one of the pilots asked to change course and fly at a higher altitude because of bad weather, officials said. Heavy thunderstorms were reported in the area at the time.

Air traffic control approved the pilot's request to turn left but denied permission for the plane to climb to 38,000 feet from 32,000 feet, Djoko Murjatmodjo, an aviation official at the Indonesian Transport Ministry, told the national newspaper Kompas.

The increased altitude request was denied because there was another plane flying at that height, he said.

AirAsia CEO Tony Fernandes said storm clouds caused the pilot to ask for a flight plan change. But he added, "We don't want to speculate whether weather was a factor. We really don't know."

Once the aircraft is found, there will be a proper investigation, Fernandes said.

In addition to Indonesia's teams, several other countries have joined the hunt for the missing plane.

A C-130 plane from Singapore has been participating in the search, and the country's military says it's sending two more ships to the search area. Malaysia's transportation minister said his country has deployed three vessels and three aircraft to assist in the search. And the Royal Australian Air Force said Monday that it was deploying a patrol plane to help.

The U.S. Navy Seventh Fleet said it stands ready to assist the search efforts but so far hasn't been asked to help.

Indonesia has reached out to the United Kingdom, France and the United States for help with sonar technology that may be needed for an underwater search, Sulistyo told reporters Monday.

Several dozen anguished family members of the passengers met with airport and airline officials in a closed-door briefing Monday at the airport.

As they waited for news, some relatives took cell phone pictures of a flight manifest posted on a wall. The black-and-white papers showed every passenger's name and seat number, but not their fate.

Others simply sat and dabbed tears from their eyes.

Oei Endang Sulsilowati and her daughter were looking for information about her brother, his wife and their two children.

"We don't know what to do," Sulsilowati said. "We are just waiting for news."

"Our concern right now is for the relatives and the next of kin," Fernandes said during a news conference in Surabaya.

Some police said authorities were seeking additional materials to help identify passengers, such as photos with close-ups of teeth, DNA, or fingerprints. But police later told CNN they were not immediately seeking these materials.

East Java Police have set up a disaster victims identification area at the Surabaya airport.

Of the people on board the passenger jet, 155 are Indonesian, three are South Korean, one is British, one is French, one is Malaysian and one is Singaporean, the airline said.

Eighteen children, including one infant, are among the passengers, the carrier said. Seven of the people on board are crew members.

AirAsia, a successful budget airline group headquartered in Malaysia, had a clean safety record until the disappearance of Flight 8501. The missing plane is operated by the company's Indonesian affiliate.

The loss of contact with the plane comes nearly 10 months after the disappearance of Malaysia Airlines Flight 370, which dropped off radar over Southeast Asia on March 8 with 239 people on board.

Searchers have yet to find any remains of Flight 370, which officials believe went down in the southern Indian Ocean after mysteriously flying thousands of kilometers away from its planned route from Kuala Lumpur to Beijing.

But some aviation experts don't think the search for Flight 8501 will be as challenging as the hunt for MH370.

"We are not talking about the deep Indian Ocean here," CNN aviation correspondent Richard Quest said. "We are talking about congested airspace around Southeast Asia. There will be much better radar coverage. There's certainly better air traffic control coverage."