Search suspended for 5 in Army helicopter crash near Oahu 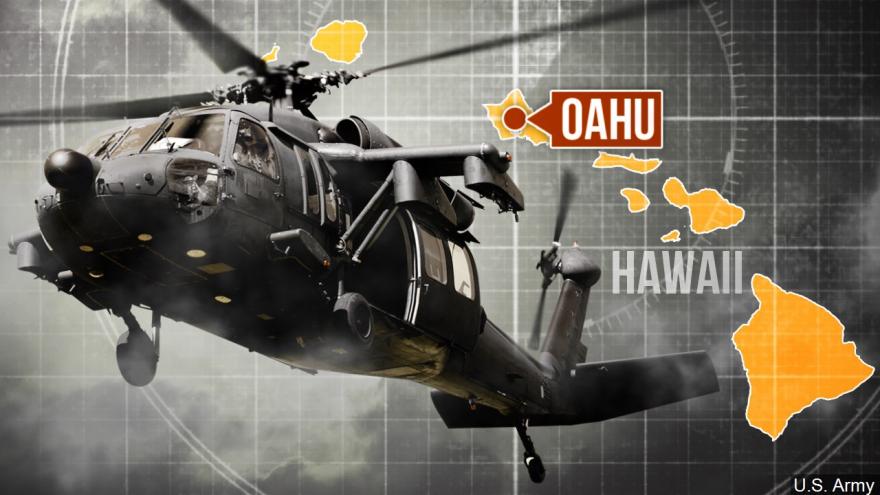 (CNN) -- The US Coast Guard has suspended the active search for five crew members missing after their Army UH-60 Black Hawk helicopter went down last week off the Hawaiian coast.

"A decision to suspend searching without finding survivors is extremely difficult given the depth of its impact," Rear Adm. Vincent B. Atkins, commander of Coast Guard 14th District, said in a statement.

The helicopter crashed August 15 during a training exercise about 2 miles off Oahu, according to the Coast Guard.

Coast Guard and Navy vessels and helicopters, along with civilian authorities, searched an area of more than 72,000 square nautical miles in 132 searches, the Coast Guard said Monday. "As we suspend the search we stand ready to support any future operations the Army conducts, and continue to provide any comfort we can for those suffering from this tragic loss," Atkins said.

The Coast Guard spotted a debris field near Kaena Point roughly 80 minutes after personnel at Wheeler Army Airfield in central Oahu lost communications with the helicopter. According to CNN affiliate KHON, it appears that a fuselage and a helmet were found.

"As we pick up debris, we'll bring that back here and we'll assemble that, but investigators will eventually delve into what may or may not have caused this," said Lt. Col. Curt Kellogg, a spokesman for the 25th Infantry Division, in a news conference last week.

Weather in the area was partly cloudy Monday with winds of 15 to 25 mph and 2-foot seas.

The UH-60 is an Army utility helicopter used in air assaults, air cavalry and as a medical evacuation unit.