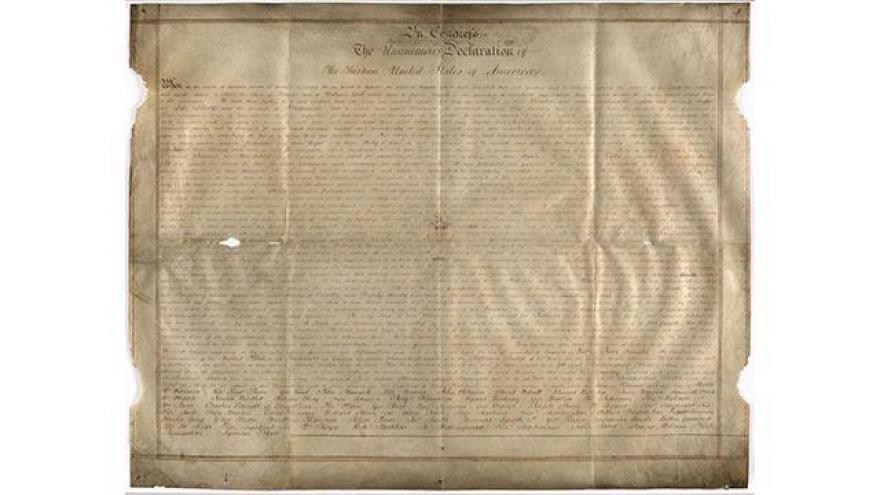 (CNN) -- A second parchment copy of the Declaration of Independence has been found. In England, of all places.

It's a remarkable discovery, because the only other parchment manuscript copy of the historic document is housed behind glass at the National Archives in Washington, DC.

You see, most copies of the Declaration of Independence are just that -- copies. They are facsimiles of the one housed in the National Archives, which is called the Matlack Declaration and regarded as the official document.

Danielle Allen and Emily Sneff -- both researchers at Harvard University -- found this parchment manuscript in a records office in Sussex County, England. So they're calling it The Sussex Declaration.

"Up until now, only one large-format ceremonial parchment manuscript was known to exist," Allen said. "That one is in the National Archives and was produced in 1776. This one was produced a decade later, with the signed parchment as its source."

Both versions measure 24 by 30 inches, although unlike the official one the Sussex copy is oriented horizontally.

And, Allen said, "it illuminates the politics of the 1780s in a flash."

The list of signatories in "The Sussex Declaration" is not grouped by states. It supports the notion that the Declaration's authority rested on one united people, not a collection of states.

John Hancock's signature is more prominent on the official Declaration, while on the Sussex copy all the signatures are the same size.

Travel to the UK

Allen and Sneff, who presented their findings last week at Yale University, said that nationalist James Wilson was the likely commissioner of the parchment on behalf of the federal Constitution.

The scholars determined the parchment was definitely written in the US, mostly likely in New York or Philadelphia. It is believed that the Third Duke of Richmond -- known for his support of Americans during the Revolution -- could have originally owned the document.

It is unclear, however, when and how the parchment reached the UK.

Click here for more information on The Sussex Declaration