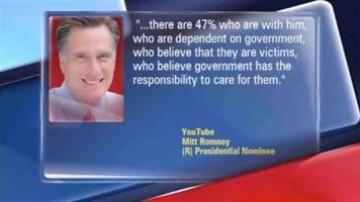 In it, Mitt Romney is caught on a hidden camera making a shocking statement back during a private fundraiser in May.

He said nearly half of Americans will vote for President Barack Obama because they rely on government support.

In a statement the Romney Campaign makes no apologies saying, "As the governor has made clear all year, he's concerned about the growing number of people who are dependent on the federal government."