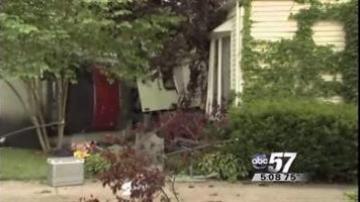 CALUMET CITY, Ill -- A truck driver is dead after his rig crashed into the front of an Illinois home.

It happened early Thursday morning. Three others are in the hospital including the semi driver's young daughter.

Witnesses say the semi swerved out of control and its trailer smashed into the back end of a car, then it slammed into the house.

"We could see this semi start to drift on our side of the road and my brother started saying, 'why isn't he slowing down?'” said Raelyyn Zenon. “It’s just amazing that it could have been the front of the car instead of the back of the car.”

The driver's daughter is between 8 and 11-years-old.