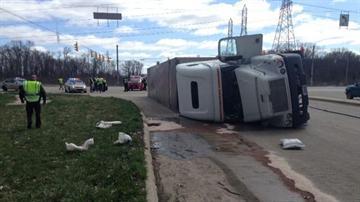 MISHAWAKA, Ind. -- A semi filled with rolls of paper flipped onto its side Tuesday around noon at McKinley Highway and Capital Avenue. Even though the westbound lanes were closed for a few hours, traffic still kept moving.

The driver suffered minor injuries but was able to crawl out of the semi on his own.

"He had just a couple of minor injuries and he was able to walk around and talk to us and tell us the details of the accident," said John Snyder, Division Chief of the Penn Township Fire Department.

It took hours for hazardous material crews to clear the wreckage because diesel was everywhere.

"It's not an extremely hazardous material but it is poisonous to fish and wildlife and to the plants around it," said Snyder.

Firefighters worked frantically to keep the diesel fuel from leaking into storm drains.

"The crews threw down some oil absorbent around the drains themselves to stop the oil that they could from leaking in," said Snyder.

Snyder said cleaning up diesel fuel is always a hassle.

"It started leaking out into the street and into a storm drain that enters into the wetland northwest of here or may tie into the rivers," said Snyder.

The driver said he was two blocks away from his destination when the accident happened.

He was too upset to go on camera but said a weight shift and the wind might have been factors in the crash.