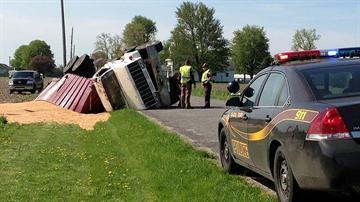 The 80-year-old driver was shaken up, but not injured in the rollover.

The driver said he moved over to the edge of the road so a school bus could pass. That’s when his rig rolled over.

The accident left quite a mess to clean up.

Bud’s Towing responded to the scene to upright the truck and tow it away.

The truck’s location made it difficult, but not too difficult.

They got the rig on its wheels on the first try.

"That's the way they are supposed to come up, like that,” said Ron Stealy of Bud’s Towing.

With the truck hauled away, all that was left was to clean up the 700 bushels of corn kernels left behind.

"It's going to be a while,” said Greg Kopfenstein, the owner of the truck.

Kopfenstein owned the truck. His father was driving it.

"I was up in Niles, Michigan loading a semi when I got the phone call; and I called where I was working and told them; I said, 'I've got to come in. I've got a truck that just rolled and we've got corn to pick up,'" said Kopfenstein.

His brother, Dale Kopfenstein, brought a giant vacuum and a spare truck to haul it in.

Farming families, like this one, stick close together because they never know when an accident like this will happen.

"This is our income that we are seeing out here on the ground and we've got to get it sucked up,” said Greg Kopfenstein.

Even though he is concerned about the corn, it was his father that had him worried the most.

Replacing the truck will likely cost around $25,000.