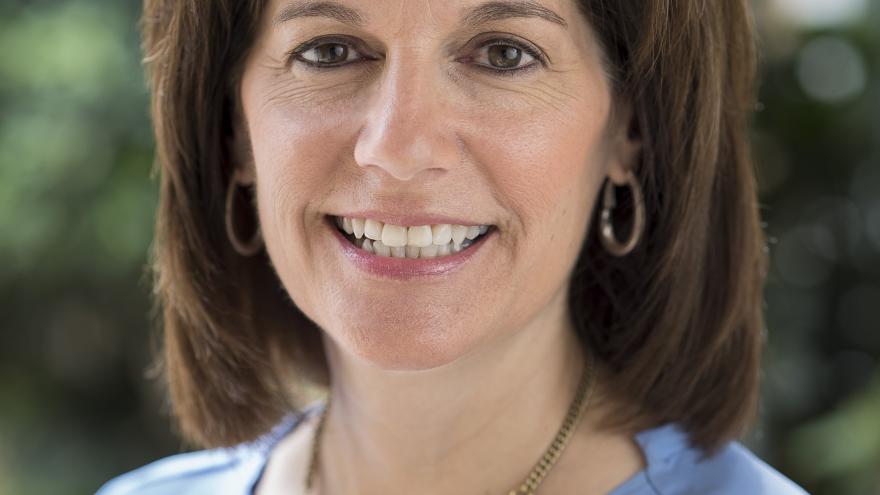 (CNN) -- Throughout my career in news, I have heard so many stories of sexism in the workplace and in life from friends and colleagues. I've had a few moments of my own.

So when I sat down with newly elected Sen. Catherine Cortez Masto, I wasn't surprised to hear her say she had her own gender-related anecdotes, but I was floored by what she told me a male colleague said to her as a young law associate.

"I had a colleague look at me and say, 'Those are great birthing hips,'" Masto explained matter-of-factly during our interview in the US Capitol's adorned Lyndon B. Johnson room.

I asked Masto, 53, how she responded to comments like that from someone she worked with. Unlike many of us, who only find the perfect zinger in retrospect, she found the words in real time.

"You put it back in perspective," she explained. "For me, it was about, 'Listen, that's not appropriate talk. And more importantly, I am here to use my brain and to work with you as your equal.'"

Masto was elected to fill former Senate Democratic Leader Harry Reid's seat in Nevada in November 2016 -- the same day Donald Trump won the White House. For Democrats, her victory in the competitive Nevada race was one sweet spot on that very dark election night.

Masto's election also made history. She is the first female US senator from Nevada and the first-ever Latina senator, a barrier-breaking achievement for a badass woman who is the granddaughter of a Mexican immigrant and is now fighting for more diversity in the Senate.

"Going through the campaign and realizing that that was a potential was, no doubt, it was exciting," Masto said. "I mean, who wouldn't want to make history. For me, there was more to it, though. It was bringing more diversity to the United States Senate."

As a Latina, Masto is well-aware that under President Trump, whose rhetoric about Mexican immigrants drew criticism throughout the campaign, her position in Washington has taken on greater significance. She explained to me that she views it as her responsibility to try to "educate" this White House.

"Listen, I am going to be very vocal," she said. "I think that we've seen things come out of this administration -- it started on the campaign trail -- the divisive rhetoric, the racism, the discrimination, the targeting of Mexicans as rapists and criminals. Right. He's talking about my family. He's talking about many of us. And he needs to be educated."

The White House did not return a request for comment on Masto's remarks.

'It's why my grandfather came here'

As the granddaughter of a Mexican immigrant, Masto feels a personal connection to the stories of many of her constituents.

"These are hardworking people who have come to this country for an opportunity at the American dream," she said. "It's why my grandfather came here. And that is why so many people that I have met in Nevada, the families, the dreamers, when I sit around the table with them, they are hardworking. These kids are going to school, working jobs at the same time to support their families."

Growing up, Masto says her grandfather had a "tremendous" influence on her life -- baking for her family and teaching her how to play the guitar.

"He was a musician, and I think he was self-taught. Very talented -- piano, guitar, violin, banjo," she said. "He was incredible and used to sing to my sister and I when we were little."

Masto also understands that as a Latina representing a state with a significant Latino population, she is an important role model for the next generation.

"The most important things are the incredible Latinas that I've met along the way, and young girls who are so excited when they meet me and they know that I'm the first Latina," Masto said. "For me, that tells me that they're looking at me saying, 'Oh my gosh, if she can do it, I can do it, too.' And that's what I want them to think."

Masto began her career in finance before going to law school, where she said she fell in love with public policy. That path took her to Washington once before, as a US attorney, though she says her perspective on the city has changed now that she is in the Senate.

"It is different sitting in this seat," she said laughing. "There's no doubt about it."

Politics has not only given Masto her career but also led her to her husband -- now a retired Secret Service agent. "We met thanks to former President Bill Clinton," she said.

Masto was working for Nevada's governor at the time. When then-President Clinton came to town, she and her future husband came face to face in a planning meeting. He asked her out to dinner right there, and they have now been together 19 years.

"And it was just one of those things that we just clicked," she said. "And I think I knew then that he was going to be the person that I would marry."

I asked Masto what gave her the confidence as a young woman to reach for the stars, and she said it was the example set by her parents.

"No doubt, my parents were hardworking, you know, middle class," she said. "My father, when my sister and I were younger, he was a parking attendant at the old Dunes Hotel and Casino. My mother was a bookkeeper in a title company. And they just worked hard, you know, different jobs, owned small businesses, always tried to move up the ladder of success."

For their children, Masto's parents put a premium on education. Masto said they were told they could do anything they wanted, with one condition.

"'Here's the one thing you and your sister have to do,'" she explained, quoting her father. "'You have to graduate high school. And you have to go to college.' That was the mandate. And he felt that education -- he and my mother both -- it was a great emancipation."

The parenting paid off: Masto and her sister were the first in their family to graduate from college. And, in just two generations, her family went from Mexican immigrant to US senator.

For someone who puts such a premium on the importance of mentors, Masto admits that she didn't have a lot of female role models on the way up the ladder but said there was one woman who helped pave the way to Masto's election as Nevada's attorney general.

"Top law enforcement, you walk in the room, it's mainly men. Right?" Masto said. "But the reason why I was able to win or run and win is because the first female attorney general in the state of Nevada, Frankie Sue Del Papa, she plays that role for me."

Masto speaks passionately about why women need more role models at the highest levels of business and government.

"We need to do a better job of mentorships and role models to bring other young women along so that there's more women in our boardrooms, there's more women here in the United States Senate and in Congress. I think there's an important role for women to play. And I'm all about tearing down those barriers."

Finding her way and moving forward

Walking with Masto through the maze-like paths under the Capitol, it is clear that she is still finding her way in Washington -- literally and figuratively. She's hanging new paintings in her office and getting used to the near-constant presence of reporters waiting behind doorways to ask lawmakers questions.

The incredible access to lawmakers at all times is one of the main reasons I love covering Congress. As a reporter, you can pretty much go up to any lawmaker at any time and ask him or her a question -- especially when they're going to vote. But, for someone new, I can see how it could be overwhelming.

"Believe me, and I've had them follow me to the restroom as well," Masto said, not quite joking. "So it's been this new culture shock for many of us that are new."

Another culture shock for Masto was the lack of diversity in the nation's capital. When she arrived in Washington in January, Masto was disappointed to see how few Latinos, African-Americans and Asian-Americans there were working in the US Capitol. Masto took it upon herself right away to serve as a role model.

"So the first thing that I did was to bring all of the Latina employees in the Senate together and we had a meeting," she explained. "And I said, 'I want to know, what are the barriers? And how can we make that door a little bit wider to bring more diversity in?' The people in government should be just as diverse as the population we represent."

Masto believes that begins with hiring and that diversity is important for its own sake.

"It's a different view. And it's important to have that view at the table," she said.

As a leader who is so thoughtful about her role as a leader and mentor for young women, I wanted to know what she says when someone seeks her advice.

"I tell them, you don't know what your path is going to be. So don't try to force it. Keep all of the doors open. And be passionate and persistent about what you believe in. And you can achieve it. And there are going to be barriers along the way. But you've got to work through those barriers and continue to move forward."