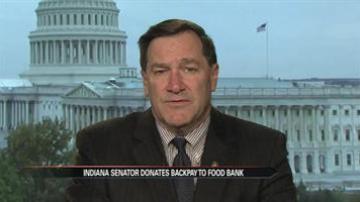 SOUTH BEND, Ind. -- Washington lawmakers are just now receiving their paychecks for the time they worked during the government shutdown. Indiana's Senator Joe Donnelly is donating his $5,000 to food banks across Indiana.

Senator Donnelly says he feels like Congress let the nation down when the government shut down for 16 days, so he says the least he can do for families in need is help them get through this time.

"I want to make sure that every child doesn't have to go to bed hungry, that families are able to put food on the table, and what we tried to do is do it throughout the entire state so that in every corner, we had families that would be able to take care of themselves," said Donnelly.

The Food Bank of Northern Indiana expects to be able to feed thousands of families this holiday season because of Senator Donnelly's donation.

"His donation of $500 out of his salary during the shutdown will provide 5,500 meals to families in need," said Marijo Martinec, the Associate Director of the Food Bank of Northern Indiana.

Senator Donnelly donated all of the money he earned while the government was shut down to food banks in Indiana.

"We've seen an increase over the past the month of people who are coming to the food pantry that's located on site here at the food bank," said Martinec.

She says Senator Donnelly might not realize how many families he's feeding with his donation.

"For every $1 that's donated to the food bank we can provide up to 9 meals or eleven pounds of food," said Martinec.

She says the need is great in south bend and only gets greater as the holidays get closer.