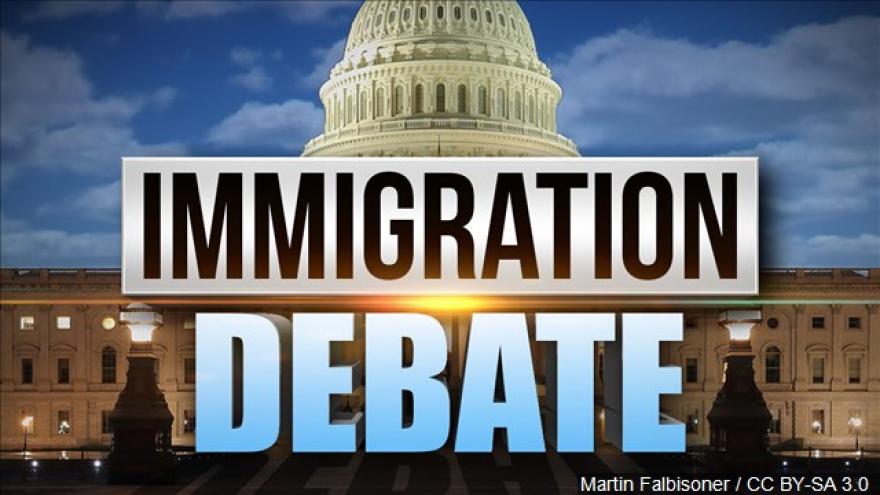 After weeks of negotiations, the Senate debate on immigration lasted one hour on the floor and ended without a single amendment passing to protect DACA recipients or fund President Trump\'s proposed border wall. Photo courtesy Martin Falbisoner / CC BY-SA 3.0

(CNN) -- It was supposed to be a raucous, week-long, open floor debate on immigration -- the President's signature issue and such a contentious topic that Democrats shut the government down over it just a month ago.

Instead, it was the incredible shrinking immigration debate, which lasted roughly one hour on the floor and ended without a single amendment passing to protect DACA recipients or send a cent of funding for President Donald Trump's border wall.

Fingers were pointed in all directions as members retreated from the floor, defeated, frustrated and downright mad that after weeks of negotiations, the best chance they had to broker a deal ended without any resolution for a population everyone agreed they had wanted to help.

A group of bipartisan lawmakers -- the same group responsible for helping end a government shutdown weeks before -- fumed at the White House's treatment of their proposal, which they argued could have inched toward passage, had the White House stayed on the sidelines rather than actively lobbied against them.

On the floor of the Senate, Sen. Susan Collins, a moderate Republican from Maine, was frustrated that the amendment her group had brokered without Sen. Chuck Schumer, the Democratic leader, was being referred to as the Schumer amendment. The name undermined the entire point of her group's efforts: that it had been reached by the middle, not by party leaders. Collins could be heard telling colleagues that the move was "so wrong."

Sen. Mike Rounds, a Republican from South Dakota, acknowledged "there were a few games being played."

"You don't forget 'em, but you just roll with them," Rounds said.

Just hours after senators had reached an agreement on a plan that provided a path to citizenship for DACA recipients in exchange for $25 billion in border security, the administration began their effort to undermine the amendment. President Donald Trump issued a veto threat. And in a briefing call with reporters Thursday, two administration officials, one of them a White House official, called the bill "outrageous" and "irresponsible," and argued it would "put many innocent lives at risk."

"The bill is so spectacularly poorly drafted, I mean unless you imagine it was drafted for the purpose of gutting immigration enforcement," the White House official said, before the officials criticized Sen. Lindsey Graham, R-South Carolina, who fought back.

"I could care less about what an anonymous White House official says. I'm looking for leadership from the White House, not demagoguery," Graham told reporters.

Sen. Chris Coons, a Democrat from Delaware, said he blamed the White House "a great deal."

"It is striking to me that the White House and the Department of Homeland security actively and aggressively campaigned against the McCain-Coons bill and the bipartisan Rounds-King bill and yet both of those bills got more votes significantly then the White House- initiated Grassley bill," Coons said.

Sen. Lisa Murkowski, a Republican from Alaska, lamented that the White House had missed an opportunity.

"I fear that you've got some within the White House that have not yet figured out that legislation almost by its very definition is a compromise product and compromise doesn't mean getting four Republicans together and figuring out what it is that those four agree on, it is broader," she said.

In the end, the bipartisan proposal was short six votes it needed, but did far better than the White House-backed plan, which only got 39 votes.

And it wasn't just Republican opposition that stopped the bipartisan proposal. Three Democrats also voted against the proposal. But Democrats and Republicans in the middle believed the White House's efforts had given senators on the fence little political cover to support their proposal.

With just weeks to go until the original March 5 deadline and a week of recess ahead, members acknowledged there was little time left to find a breakthrough now.

Senate Majority Whip John Cornyn, the majority whip, told reporters after the failed amendment votes that he does not see the issue of immigration being raised again soon.

"I don't see it. We couldn't get it together this week. We've got other things we have to do, which are pressing. The Majority Leader's (Mitch McConnell) the one who sets the agenda. We need to get some things done: nominations, other bipartisan legislation. If I were him, I'd be reluctant to spend another week of wasted time."

He continued, "I thought the deadline and I thought the empathy that people have for these young people would be enough to change the outcome here, but apparently not yet."