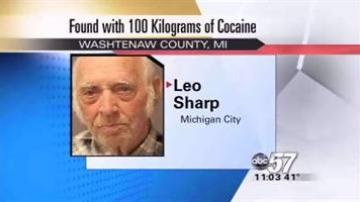 MICHIGAN CITY, Ind .-- It's hard to think of an 87-year-old man trafficking 104 bricks of cocaine across state borders.

Leo Sharp was arrested during a routine traffic stop outside of Ann Arbor, Mich., on Oct. 21. He refused to allow police to search the bed of his truck, but a drug-sniffing dog uncovered the hidden cocaine.

Sharp was charged on Sunday with conspiracy to possess with intent to distribute cocaine. He was released on a $10,000 bond on Monday.

Neighbors say he keeps to himself and they hardly see him.

James Kelley has lived across the street from Sharp and his family for 20 years. He said he knows nothing about about him.

"I didn't even know his name. Someone called me on the phone today and I didn't know who they were talking about."

The neighborhood is full of families who have lived there for their whole life.

But in that respect, Sharp is the odd ball.

"I don't think anyone on this street knows who he is," added Kelley.

Sharp is expected back in Michigan on Nov. 10 for another hearing.