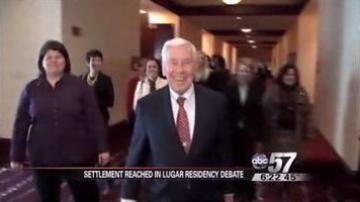 INDIANAPOLIS -- We have new details on the battle over Senator Richard Lugar's residency status.

On Friday, a judge dismissed the case!

It's part of a settlement between Lugar's lawyers and the Marion County Elections Board.

Lugar has agreed to switch his voter registration to a family farm in southern Marion County.

The senator was previously registered under an address for an Indianapolis home he sold in 1977.