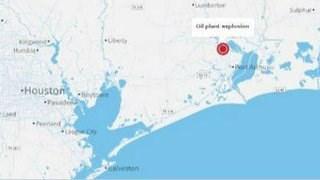 (CNN)  Seven people were injured, including four critically, in an explosion at a Texas crude-oil plant, authorities said.

The fire occurred Friday night at a Sunoco Logistics terminal in Nederland -- about 90 miles east of Houston.

According to the company that owned the marine terminal, Sunoco Logistics, it appeared to involve a crude-oil pipeline connection.

Some of the victims suffered serious burns, according to Deputy Marcus McLellan with the Jefferson County Sheriff's Office.

"Three of the injured were transported to burn centers via helicopter, four by ambulance to area hospitals," Sunoco Logistics said in a statement.

The injured were employees of a company that contracted for Sunoco.

"Sunoco Logistics will work with the contractor, L-Con, Inc., to investigate the cause of the accident and support those injured and their families. Our prayers are with them," the company said.

The fire did not affect nearby residents, they added.

The Nederland plant is used to store crude oil and other natural gases, with a storage capacity of approximately 24 million crude oil barrels, according to Sunoco's website.