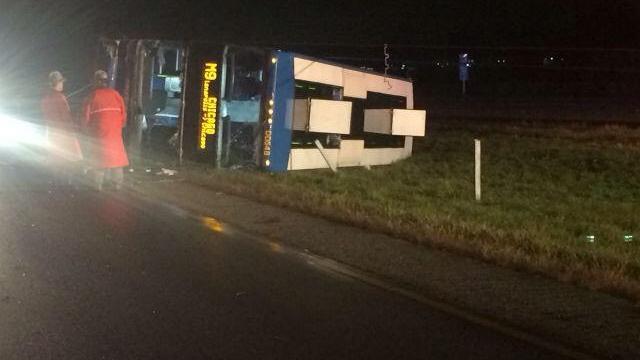 The Indiana Department of Transportation (INDOT) said just before 5 a.m. that a serious crash on Interstate 65 North, just south of exit 99 (Greenwood Main Street), had closed north- and southbound lanes of traffic. As of 7 a.m. all lanes were back open.

Indiana State Police (ISP) confirmed a two-level Megabus had crashed. ISP said it had roughly 50 people on board and several of them were injured. Crews on the scene tell RTV6's Anne Kelly that 15 to 20 people were hurt.

ISP confirmed the bus was on its way to Chicago from Atlanta. Its manifest showed it made stops in Chattanooga, Tenn., Nashville, Tenn., and Louisville, Ky.

Investigators said it appears a vehicle had been stopped on the side of the road, awaiting emergency assistance after a crash. That's when the Megabus swerved to avoid the stopped vehicle and overturned, crashing.

ISP said depending on the severity of the injuries, some crash victims would be taken to Eskenazi Health and others would make it to other area hospitals.

Other victims were taken to IU-Health Methodist Hospital and Johnson Memorial Hospital.

The Greenwood Fire Department said one person was in serious condition after the crash -- a woman whose hand was trapped under the bus itself.

Johnson Memorial Health Director of Business development said four of the victims were brought to Johnson Memorial, all with minor injuries. They will be released later Tuesday.

ISP said crews planned on moving the large bus into the median during the morning rush hour. They were able to get the bus moved and away from the crash site by 8 a.m.