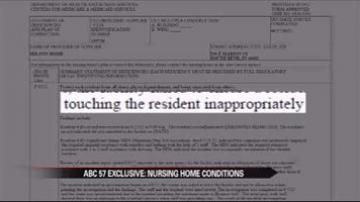 South Bend, IN -- 5,185. That's the number of reports for inadequate care in Indiana nursing homes over the last year.

If that sounds high, it's because it is. According to data compiled by Medicare.gov, Indiana is one of the worst offenders in the nation for serious healthcare deficiencies against the elderly.

ABC57's Daryl Bjoraas poured through dozens of pages Thursday examining offenses by nursing home caretakers in South Bend, and what he found was disturbing.

Mice droppings were reported all over the kitchen at the Cardinal Nursing and Rehabilitation Center near downtown South Bend.

That pales in comparison to what was found just a few blocks away at the Milton Home this past June.

One patient was sexually abused. Just a few days later, another patient didn't receive her medication for 11 days!

He tried calling a number of nursing homes in the area to find out how they planned to correct these deficiencies, but they had already left for the day.

Check back with abc57.com for more updates.