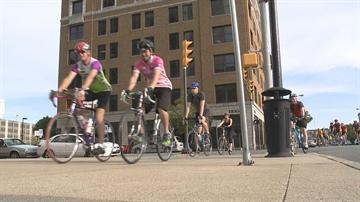 SOUTH BEND, Ind. - Bicyclists, joggers and motorcyclists made a stand asking drivers to share the road at a group ride and rally in South Bend on Wednesday.

The riders and runners started on State Road 23 near the University Park Mall at the spot where 62-year-old Steven Carey was killed in February after being hit by a car while riding his bike.

"He bicycled 6,000-miles a year,” described Rick Carey, Steve Carey’s cousin.  “It was unfortunate, it wasn't the first time he was hit, I've been hit several times myself and I'm extremely safety conscious."

Wednesday’s ride from University Park Mall to downtown South Bend was made to highlight the dangers motorcyclists, bicyclists and pedestrians face on the road.

“It’s a war going on out here,” Rick Carey explained.  “We have at least one fatality of a bicyclist every year, at least one in this county."

When the ride downtown finished, a rally was held in which city and county leaders highlighted recent car accidents involving pedestrians or bicyclist.  Officials also stressed the need for the entire community to commit to making streets safer for everyone.

"More than anything it takes the people of south bend, educating ourselves and educating each other on the needs to make our streets safe," stated South Bend Mayor Pete Buttigieg.

May is “bicycle month” in South Bend, the annual “bike the bend” celebration will be held on May 20.