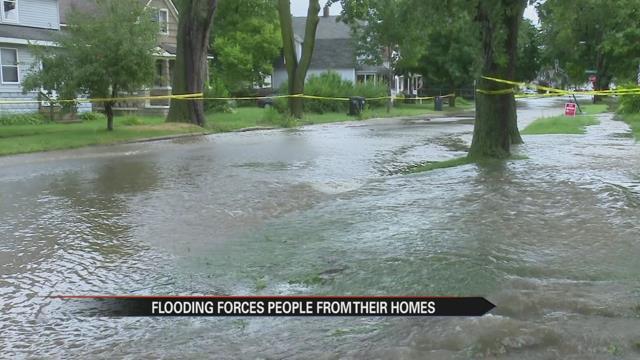 In South Bend’s South Side neighborhoods just east of Michigan Street many are experiencing damage to their homes.

“It’s been an excruciating day,” says Darla Thomas who lives on Ewing Street.

More than 12 hours after the storm and waters are still flooding the streets and sidewalks in neighborhoods on the South Side of South Bend.

“I’ve lived here for 27 years and this is the worst I’ve ever seen it,” says Thomas.

Thomas says record rainfall caused up to two feet of water to flood her basement.

“The water levels got so high last night that it submerged the hot water heater where the gas went out. So my house is kind of filled with gas right now,” says Thomas.

Thomas’s family had to stay outside since it was not safe for them to go into a home full of gasoline.

Several blocks away off Walter Street the Red Cross is hosting a shelter for flood victims at the O’Brien Recreation Center.

“People don’t even have to stay the night they can come in and take a break from the heat and the stress of dealing with the floods in their homes,” says
Becki Faunce the Disaster Program Manager for the Red Cross of Northern Indiana.

John Antonucci, St. Joseph County Emergency Management Director says a crew is trying to figure out the best way to drain the water and should have a better sense by Wednesday morning.