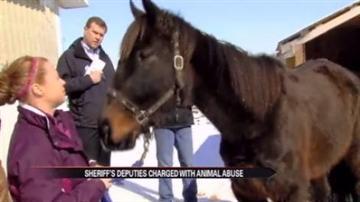 James Wilyard, his wife Georgia, and the couple's daughter Molly Mekoski are facing charges of abusing their three horses.

A vet determined the animals were underfed and about 100 to 200 pounds underweight.

The county has since taken possession of those animals.

"Their hoofs are long. They're not maintained. Their manes were full of burrs. They just look terrible," said Gail Hirt of Beyond the Rose Equine.

The three were arraigned last week.

If they are convicted of the misdemeanor charge they could face up to a year in prison.