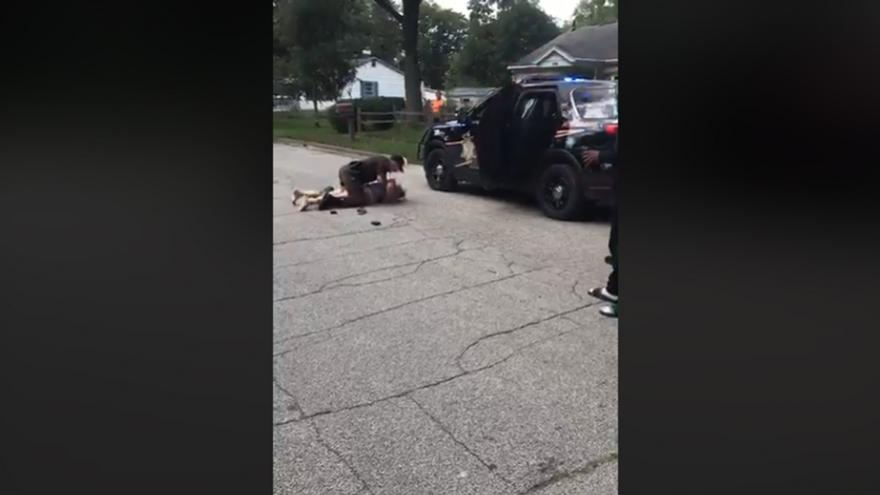 BERRIEN COUNTY, Mich. -- The Berrien County Sheriff's Office released new details in the arrest that was caught on Facebook live on Tuesday.

The video showed the woman face down on the pavement as the deputy attempts to place handcuffs on her.

The sheriff's office says the video begins 26 minutes after the deputy initiated the traffic stop.

The internal investigation into the incident will include a review of dash camera videos, body camera videos and police reports.

Preliminary information is the 39-year-old woman was pulled over in the 1600 block of Michigan Avenue for a traffic violation, the sheriff's office said.

She provided false information regarding her identity, so she was placed in the back of the patrol vehicle, but was not handcuffed, reports said.

When the deputy realized she wouldn't provide her true identity, he attempted to place her in handcuffs, reports said.

She physically resisted the deputy as he gave her verbal commands and attempted to take her into custody, reports said.

The deputy was able to get her into handcuffs after a brief struggle after a bystander provided assistance, reports said.

The woman was taken to the hospital for treatment of minor injuries sustained while resisting arrest, reports said.

After she was released from the hospital she was taken into custody on preliminary charges of resisting and obstructing a law enforcement officer, possession of methamphetamine, driving on a suspended license, open intoxicant in a motor vehicle, providing false verbal information to law enforcement.

The sheriff's office says all "use of force" incidents are reviewed and investigated.

Further details will not be released while the investigation is conducted.