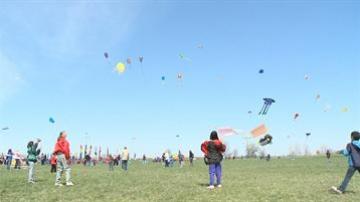 SHIPSHEWANA, Ind. -- Thousands of people went to Shipshewana Saturday for the 3rd annual Kite Komotion festival. The all-day event drew kite enthusiasts from all across the country as they put on a show for anyone interested.

Nylon flaps in the wind as kite enthusiasts work to the sound of music, all in an effort to put on a show.

"The thing that's neat about this is kiting is limitless as far as age goes. You can be 9 or 90," Kathy Brinnehl, a participant in the festival, said.

She's been flying kites competively for the better part of two decades. She said there's a real sense of peace when flying one.

"You are literally interpreting the music with your kite," Brinnehl said. "So you can make the kite dance in the sky."

Saturday, thousands of people had the same idea.

Darryl Waters drove all the way from Holland, Michigan for the festival. His kites were a huge hit, both of them bigger than a city bus.

"I just never grew up," Waters said. "I've been flying ever since I was a kid, and I've just loved doing it ever since. As I got bigger, the kites did too."

The kiting community is tightly knit, so often times, it's about more than just a hobby. Friendships are formed.

"A lot of the kite flyers here are maybe a little crazy or a little nuts, but we've found something we love to do," Waters said. "We love to put on a show."

Even people who aren't dedicated to kiting, found it fun.

"It's kind of cool to see all these different kites flying around," Brian Maust, a newfound kite enthusiast, said.

He lives in MIddlebury, and said it has been a while since he's seen the community come together like this.

"Anything to bring people together to have fun," Maust said. "Forget most of the worries of the world, and just have a good time."