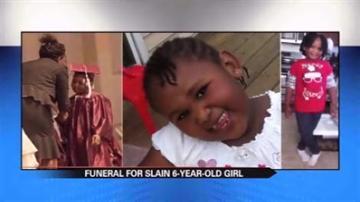 SOUTH BEND — The South Bend community will say goodbye to 6-year-old Shirley Mundia, the girl who was stabbed to death by her father in early June.

Funeral services are set for Saturday at 4 p.m. at Pentecostal Cathedral in South Bend.

The service is open to the public.

Mundia was killed in her Irish Hills apartment on June 2. Her father was shot and killed by police during the attack.