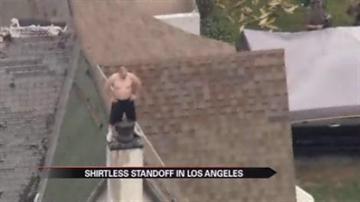 LOS ANGELES -- It was a stand-off in LA, but not like you would imagine. Michael Vargas stood on a narrow chimney, high above a street full of LA county deputies.

Investigators say Vargas is a convicted felon wanted on an outstanding burglary warrant.

When they showed up, he barricaded himself in the attic, then climbed onto the roof. Vargas stayed still up there for nearly three hours. When he came down, his mother was happy that he wasn't harmed.

"I was worried he would fall, or they would shoot him...I just didn't want my son getting hurt by the police," said Cruz Frias, Vargas' mother.

The Sheriff's department said Vargas is now in custody for the original burglary warrant, as well as on new charges of possession of a firearm and a bulletproof vest.