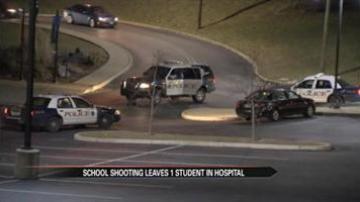 CHESTER, Pa. -- Police in Pennsylvania are investigating a school shooting that left one student in the hospital.

The shooting put the campus on lockdown Monday night.

Police say the shooting happened near the athletic center of Widener University.

The student was shot in the side while sitting in a car.

The suspect remains on the run.

Police do not believe it was a random shooting.

"We have increased police presence, we have brought in K9 units,  actually we've increased by about 30% in the department," said Joseph Bail Jr, Police Commissioner of the city of Chester.

The victim is listed in critical but stable condition.