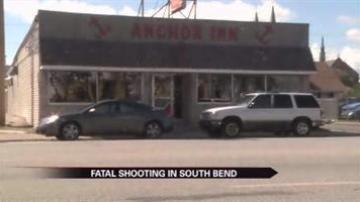 SOUTH BEND, Ind. - Police were called to the Anchor Inn right before the bar closed Sunday on a call that two men were shot. Family members of the man who died from his injuries tell ABC 57 that the bar's deejay got into a verbal dispute over music and the jukebox and they stepped outside and that's when the arguement turned physical.

St. Joseph Metro Homicide sent out a press release at 10:50am Sunday morning stating that two adult men have been arrested on preliminary charges involving this case. However the release goes on to say that they are not releasing either name until the men are formally charged in connection with their involvement.

Police say Cesar Victor Flores, 32, of South Bend was shot multiple times and was lying in the street when they arrived at 2:47am. Officers also found 40-year-old Dismas Deleon shot one time as well.

A women who idenitified herself as Gabriela, who said Flores' was her cousin was looking for her car keys Sunday afternoon outside the bar. She told ABC 57 News that she was with Flores when he got shot. She also told us what happened that led up to the shooting. According to Gabriela, she, Flores, another male cousin and one of their female friends were enjoying the night at the Anchor Inn on the corner of Phillipa and Western Ave. She said the deejay was playing Latino dance music when he stopped to call it a night around 2:30am.

Gabriela said they asked him to play more music, but he said he was done and if they wanted to hear more music they could pay money and play music in the jukebox. Gabriela said her cousin Flores was still talking about the deejay and how he wanted him to continue playing when she said the deejay must have overheard him and came up and pushed his chair over sending the 32-year-old to the ground.

She said the two men agreed to take it outside and that's when it turned deadly. Gabriela said the deejay got out his gun and shot Flores four to five times. However, ABC 57 has learned that the deejay, Dismas Deleon, did not shoot Flores. According to police the person who shot Flores was Dismas' relative, Ramon DeLeon, 24 of South Bend.

Gabriela said she knelt besides him and attempted to give him CPR until the paramedics arrived. Police said Flores died from his injuries at Memorial Hospital. She said her other cousin that was with them got out his gun and shot the deejay.

She then said Dismas Deleon ran inside the bar and locked the doors until the police arrived. Gabriela said before the deejay ran inside he pushed her to the ground as she was screaming and pulling him away from her cousin to try to stop the shooting. She said when she fell to the ground she dropped her keys and couldn't locate them.

According to Gabriela, Flores has five children ranging in age 4 to 11. She said he does not have a funeral or death insurance and the family does not have the money needed to give him a proper Catholic burial. They have set up an account with St. Adalbert Catholic Church. The family was too distraught to speak on camera, but did provide ABC 57 with a photo of Cesar Flores.

Gabriela said she was detained by police for hours after the shooting and hadn't been to sleep for the night when she ran into ABC 57.

The owner of the Anchor Inn did not want to comment on camera but did tell ABC 57 he knew Dimas Deleon, but would not confirm or deny he was the bar's deejay. He did say he has owned the bar for the past 22 years and he was not working last night when the shooting happened. He also said he turned over video to police that was taken inside the bar right before the shooting happened outside.

Anyone with any information regarding this case please contact Metro Homicide at 235-5009.