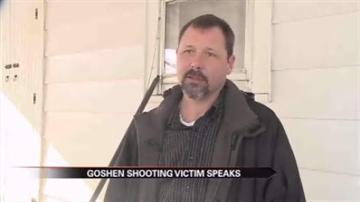 GOSHEN, Ind. – In early October, Michael Edwards was shot four times and left for dead in the front yard of his home on West Clinton Street. No one has been arrested for the shooting and Edwards says he won’t feel safe until the gunman is in custody.

Shot 4 times by a stranger in his own yard, Michael Edwards says he's lucky to be alive.

"You know everything happens for a reason, so this has kind of opened my eyes to what's important in life,” said Edwards.

He was practicing archery inside his carport when he turned around to a face a pistol pointed directly towards him.

"When he went to go chamber a round, I threw my bow at him and ran out to my front yard, but when I was running by he shot me four times,” said Edwards.

Bullets pierced both arms, a shoulder and his stomach by the time he reached the edge of his front yard.

"It actually just felt like somebody poking me, except for when he shot me in the stomach. That hurt. It felt like there was a hot poker in my stomach,” said Edwards.

A nearby bicyclist heard his cries for help and called 9-1-1.

Edwards says he has been struggling since the shooting.

"I get angry. You know I got some good friends who help me work through that,” said Edwards.

Goshen Police re-released the suspect’s information Friday, almost 3 months to the day after the shooting.

The victim described the shooter as a dark-complexioned black male, between 15 and 20 years old, skinny and around 5'9” tall.

"I don't think it was a guy running around with a guy, I think there was some kind of organization to it-he was doing it for something,” said Edwards.

Until the shooter is behind bars, Edwards continues to look over his shoulder. He says everyone should take this as a lesson.

"Be aware of your surroundings- even just walking out of your house, walking through a parking lot or things like that. Be aware of the people around you and things going on around you,” said Edwards.

Police told Edwards that Facebook activity after the shooting alluded to a possible gang initiation.

One of thing they had to do to get initiated was go out and shoot somebody in the middle of the day.

There is a reward for information in this case. Contact Goshen Police or Crime Stoppers at 800-342-STOP.